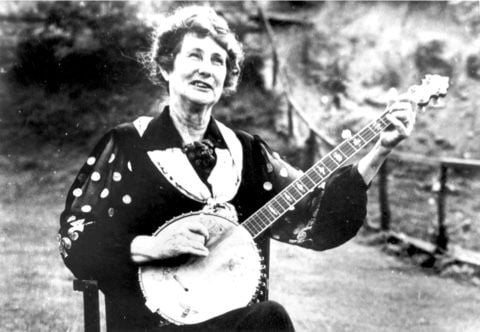 SamanthaBumgarner mixed the traditional music she had heard and played all her life with original songs. It was said she had a knack for setting mountain stories and legends to music. 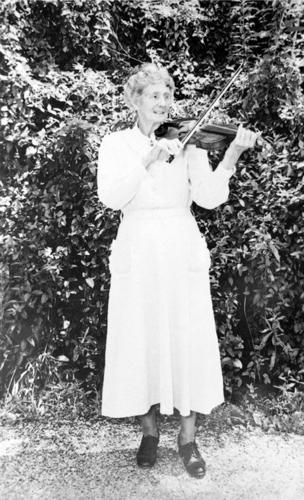 SamanthaBumgarner mixed the traditional music she had heard and played all her life with original songs. It was said she had a knack for setting mountain stories and legends to music.

Known as the fiddling ballad woman of the mountains, Samantha Biddix Bumgarner was born on Halloween in 1878 and died on Christmas Eve in 1960.

In between she traveled to New York City to make a record; to Del Rio, Texas, to appear on Dr. John Brinkley’s radio show; and to the White House to perform for President Franklin Roosevelt and the King and Queen of England. She also entertained thousands during 31 years of headlining Asheville’s Mountain Dance and Folk Festival, starting in 1928 and continuing through 1959.

Folksinger icon Pete Seeger credited Bumgarner as his inspiration for playing the five-string banjo, saying he learned the instrument after first hearing one played at that festival by a mountain girl named Samantha Bumgarner.

“Of all the female pickers of the twenties, the one who was the strongest link between Appalachian folk music and the emerging commercial country scene was Samantha Bumgarner,” say Mary Bufwack and Robert Oermann in their 1993 book “Finding Her Voice: The Illustrated History of Women in Country Music.” Folk festival king Bascom Lamar Lunsford, organizer of the Mountain Dance and Folk Festival, called Bumgarner “best all-around musician he’d ever met.”

The daughter of mountain fiddler Has Biddix, Bumgarner was born in Tennessee and grew up in Dillsboro, where her family moved when she was young; she lived in Lovesfield at the time of her death.

Bumgarner said she taught herself to play the banjo on an instrument that was “a gourd with a cat’s hide stretched over it and strings of cotton thread coated with beeswax.” Her father wouldn’t let her touch his fiddle, so she “snitched” it to practice whenever he wasn’t home.

Here’s Bumgarner’s description of the first contest she entered: “We was in Canton, and they was havin’ a fiddlers’ convention. Somebody entered me in the contest. It was the first banjo contest I was ever in, and I was nervous. I knew I couldn’t hit a string. Besides, I had that old 10-cent banjo. And here I looked up and saw all these fine banjos coming in from Asheville. I wanted to leave, but they wouldn’t let me. I tell you I was so nervous I didn’t know I was hitting the strings ... But I won that contest. And I’ve been winning them ever since.”

In 1902, 23-year-old Samantha Biddix married 40-year-old Carson “Carse” Bumgarner, who was supportive of her musical abilities and bought her the first fiddle she ever owned.

Bumgarner had more confidence by the time she and her friend Eva Smathers Davis went to New York City in April 1924 to the Columbia Records studio on the top floor of the Gotham National Bank building. Described in “Finding Her Voice” as a “tall, bony woman,” the 45-year-old Bumgarner and Davis played “Cindy in the Meadows” and 11 other “spirited” banjo and fiddle tunes. A Columbia advertisement published two months later in the magazine Talking Machine World featured their photo (Bumgarner and Davis were “quaint musicians”) and mentioned two songs, “Big-eyed Rabbit” and “Wild Bill Jones.” “The fiddle and guitar craze is sweeping northward! Columbia leads with records of old-fashioned Southern songs and dances,” proclaimed the ad. Davis stopped performing after their recording session, but Bumgarner was just getting started.

During the 1930s she often performed on Dr. John Brinkley’s powerful radio station located across the Rio Grande River from Del Rio, Texas, and took young Harry Cagle of Sylva with her. She taught Cagle, who died in 1998 at age 80, to play the banjo, and he learned to play the fiddle, his primary instrument, by watching Bumgarner onstage.

“I played the banjo, but I watched that fiddle,” Cagle said during a 1989 interview.

Cagle performed with his band, the Country Cousins, which included Joe Deitz, his brother Bill, and Bill’s daughter Chrystal, at the 1982 World’s Fair in Knoxville, Tennessee.

Bumgarner was close to 60 when she went to the White House in 1939 with Lunsford and a group from the Mountain Folk Festival; she’d been given the affectionate honorary title of “aunt” when she was about 30.

A flyer published in The Herald in 2007 shows Bumgarner herself embraced the title. Featuring a photo of Bumgarner with her banjo, the flyer advertises “musical entertainment composed of string music and singing,” and says that “both old-time and modern music will be rendered.” It goes on to say that “one of the constituted members of the band being ‘Aunt’ Samantha Bumgarner, who plays violin, banjo and guitar.” The program would be “a strictly clean and high-class rendition of old-time music,” and the manager listed was “Aunt” Samantha Bumgarner. The flyer had blank lines at the bottom where the date and location of a show was added.

When onstage, Bumgarner mixed the traditional music she had heard and played all her life with original songs. It was said she had a knack for setting mountain stories and legends to music, weaving them into the ballads that set her performances apart.

Bill Buchanan of Savannah community remembers seeing Bumgarner when he was in his teens.

“When we’d go down to the river to swim, she’d be on the porch playing the banjo,” Buchanan said of Bumgarner, who lived along the Tuckaseigee near the mouth of Savannah Creek. “I saw her at Farmers’ Federation Day picnics in the 1940s. She played the banjo and Sebe Cope played the fiddle. The Hall family (Lyle and Clyde Hall) also sang at one event.”

When asked how he would compare Bumgarner’s playing to that of other banjo-players and fiddlers at the picnics, Buchanan said he wasn’t sure how to do that but that “others wouldn’t get more applause than her” and that “everybody liked her.”

Farmers’ Federation events were huge in their day, and Buchanan said he went to every one he could, whether he “had to walk or thumb or ride in a wood truck.”

A description of the 1946 picnic in the Aug. 1, 1946, edition of The Sylva Herald indicates that more than 1,500 people turned out for that year’s annual all-day picnic. The day was spent mostly in musical entertainment; 14 different musical groups sang and played, the newspaper said.

“Aunt Samantha Bumgarner of Sylva, and Sebe Cope of Greens Creek, both veteran performers of mountain music, were present. Aunt Samantha played her banjo, and Sebe his fiddle. Both are quite old (Bumgarner would have been 67); a contrast was provided by 4-year-old Sherry Lee Franklin, daughter of Mrs. Mildred Franklin of East Sylva, who sang.”

The Sylva Herald also featured Bumgarner in its Sept. 19, 1945, edition:

“On the Franklin Highway about two miles from Sylva we find a typical mountain home, very colorful with the flowers and beautiful setting in the heart of the Cowee mountains and on the banks of the Tuckaseigee River.

“Here dwells our own Samantha Bumgarner. For many years she has been known to everyone as ‘Aunt Samantha.’ Her banjo has become known around all sections where real mountain ballads and songs are loved and enjoyed.

“Aunt Samantha is a very nice looking middle-aged woman with a ruddy complexion and wavy black hair. She has a perfect understanding of mountain music and plays and sings the songs as no one else can.

“For many years she has been one of the outstanding features in the Folk Festivals held in this section every year. Aunt Samantha not only plays the 5-string banjo, the violin and guitar, but sings and is still a very good dancer and participates in many different steps of the festivals she attends.

“All who know her have learned to love her and the mountain music which she understands.”

The Bumgarner house along the river is no longer standing, according to Joe Deitz, who said it was his understanding that it was damaged by the 1940 flood. “Her husband died in 1941 and she moved to Lovesfield sometime after that,” Deitz said. “The house was located on the riverbank just before you start up the hill (Cabe Hill).” Local musicians, including Cagle, Sebe Cope and Davis, her one-time recording partner, would often gather on Bumgarner’s porch during those years, Deitz said.

Though Deitz and his brother Bill never knew Bumgarner, they’ve always been fascinated by her, he said. “Our father and other older people in our family often talked about seeing and hearing her perform with Harry Cagle, Sebe Cope, Ozie Helton and others on the streets of Sylva and at the Farmers’ Federation Picnics at the old Sylva School. Our years with Harry Cagle gave us a link back to her. Harry learned to play the fiddle by watching Aunt Samantha. Chrystal and Bill learned to play the fiddle by watching Harry. Ella (Bill’s granddaughter) is learning to fiddle by watching Chrystal. Apparently neither Samantha, Harry or Chrystal ever allowed anyone to play their fiddle.”

Joe, Bill, Bill’s wife Delores, Bill’s daughters Chrystal Deitz and Linda Ledford, and Linda’s daughter Ella Ledford continue to perform as The Deitz Family. Chrystal was the bass player when Cagle and the Country Cousins played at the World’s Fair.

“Chrystal learned fiddle mostly from watching, just as Samantha and Harry did,” Joe Deitz said. “Harry’s idea of teaching was to show you his finger positions on his fiddle and hope you remembered until you got home and practiced them on your own fiddle; Chrystal is teaching Ella by the same method. I think most old-time fiddlers learned this way.”

Debbie Baker of Kershaw, South Carolina, wrote to The Herald in 2007 about her family’s acquaintance with Bumgarner.

“When I was a little girl, my family lived in Lovesfield, across the street from Aunt Samantha,” Baker wrote. “My parents, Jimmy and Mary Bryson, are from Sylva. My mother was neighborhood friends with Aunt Samantha.

Baker said that “Aunt Samantha” was in her 70s when Baker was around 4 years old. She remembers that Bumgarner’s house (located about where Bryson Farm Supply is now) was “very pretty inside, with lots of antiques” and that the outside in the summer was “spectacular with vibrant-colored flowers.”

It was through The Sylva Herald that Debbie learned Aunt Samantha’s fame extended past the borders of Jackson County.

“No, I really didn’t know that Aunt Samantha had made so many achievements,” Debbie wrote. “She was this wonderful old lady that was kind, and her face would light up when she laughed.”

Rob Ferguson, a history professor at Western Carolina University, wrote the chapter on Bumgarner that appears in the 2014 book “North Carolina Women, Their Lives and Times, Vol. 1.”

“Samantha Bumgarner deserves an honored place in music and in the storied history of Jackson County,” Ferguson said. “In an era when women were to conform to certain expectations, Bumgarner and her friend Eva Davis traveled by themselves to New York City and made music history before returning to Sylva. Current and future musicians hoping to carve their own path can find ample inspiration in Samantha Bumgarner.”

Lynn Hotaling was editor of The Sylva Herald for 18 years, retiring in January 2016. She is the author of two books on local history. Local historian George Frizzell contributed to this report.