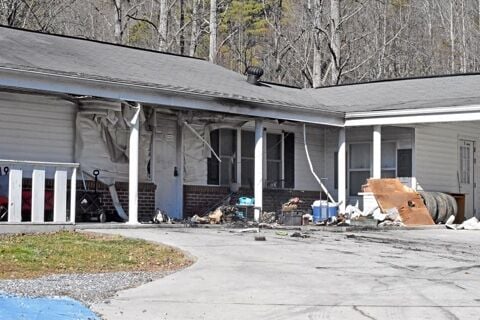 A car caught on fire Sunday near the Woodland Inn, melting siding on the structure. Firefighters extinguished and moved the car quickly. 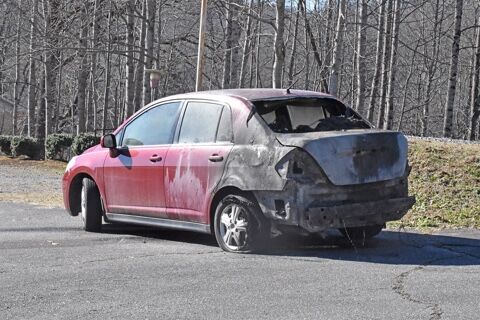 A GoFundMe account is set to go online next week to help Nancy Price replace the Nissan Versa that burned Sunday.

A car caught on fire Sunday near the Woodland Inn, melting siding on the structure. Firefighters extinguished and moved the car quickly.

A GoFundMe account is set to go online next week to help Nancy Price replace the Nissan Versa that burned Sunday.

A reported structure fire at the Woodland Inn, 2444 U.S. 23/441 near Cagle Branch, on Sunday turned out to be a burning car parked very close to the building. The blaze was close enough to melt the siding on the inn, but was extinguished before it would catch the building ablaze.

At about 5:45 p.m., Nancy Price, a three-year resident of the inn, backed her Nissan Versa up to the front door of her apartment to unload the trunk, according to building owner and manager Gary Smith.

Price went into the apartment and about 10 minutes later heard someone honking a car horn, Smith said.

The Savannah Fire Department was the lead responding agency.

“Her car ended up being on fire,” Savannah Fire Department Captain Brandon Green said. “A lot of people were calling in saying the building was on fire, but what was happening was the thick black smoke from the car and all the heat melted the soffit and then all that smoke was going up in the attic of the building and coming out the vents.”

A resident of the apartment was bedridden and unable to vacate.

“Of course with where that fire was right there in front of the door, they were not able to get the young lady out,” Green said. “We went in and luckily there was not that much smoke inside the apartment, because the fire was all outside. As far as damages, it just melted the siding on the front of the building and we knocked a hole out so we could get up in the attic and make sure everything was OK. We lucked up that the building was not on fire.”

No injuries were reported, and no residents were displaced, owner Smith said.

“We have a fantastic fire department,” Smith said “I live four miles away, and they called me and before I could get my shoes on and get there, the fire department was there.”

“We had it contained within probably five minutes of the first truck getting there,” Green said. “Two of our members, Kevin Burrell and Daniel Buchanan, arrived first and used a fire extinguisher and basically slowed it down, and then when I pulled up with the first fire truck we pulled a hose off and had it knocked down quickly.”

Firefighters “drowned” the car and pushed it away from the building in case it flared up again. Later, firefighters would return to the scene due to calls about fluid leaking from the car, but that turned out to be water the department had sprayed into the car, Green said.

Car fires most often start in a vehicle’s engine compartment.

“It is very unusual for a fire to start in the back of a vehicle,” Green said. “Myself and Chief Floyd Green and First Assistant Chief Cale Wilson had the trunk up going all through it trying to figure out how it started. There was nothing in there that would have been really obvious. The only thing we could come up with was that she had had some vehicle work done and maybe something shorted out back in the back of the vehicle.”

Price had nothing in the trunk that would have started the fire, Green said.

“Whatever it was shorted out or happened right after she shut the trunk,” he said.

The fire chief gave residents permission to return to their units.

“We never even had to turn the power off,” Smith said. “There’s just soot and melted vinyl siding, and the gutters got scorched,” Smith said.

Four people live in the apartment, he said. Price and Smith are setting up a GoFundMe account to assist her in buying a car, Smith said.

It should be live Monday.