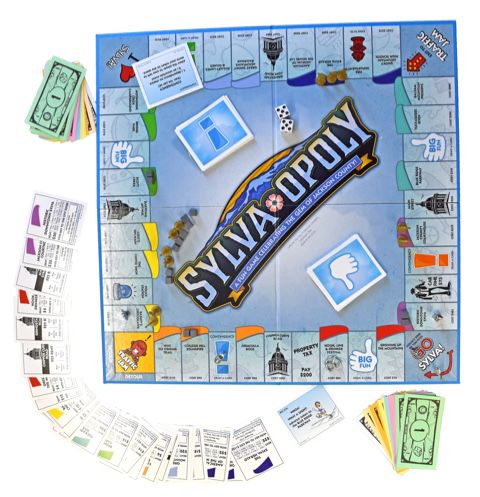 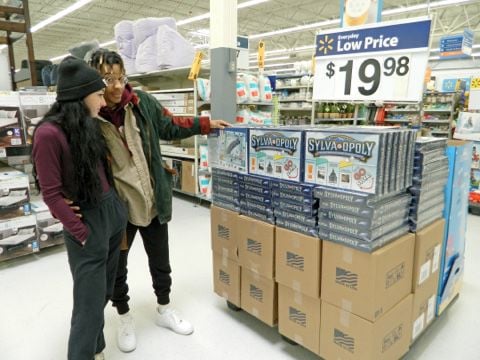 Mikenley James and James Smith, students at Western Carolina University, check out the Sylvaopoly game at Walmart. The pair agreed the game might be fun to play.

Mikenley James and James Smith, students at Western Carolina University, check out the Sylvaopoly game at Walmart. The pair agreed the game might be fun to play.

With cooler weather expected to hang around for a while, Sylva locals have a new option for indoor fun – Sylvaopoly.

Regional Walmarts have partnered with an Ohio firm to create city centric board games based on Hasbro’s classic Monopoly board game, and Sylva is one of its latest targets.

Locals and regular visitors will recognize iconic hangouts, activities and properties exclusive to Jackson County. Now, by rolling the dice and landing on the right space, they all can be bought in Sylvaopoly.

Historic Downtown Sylva is the most expensive property at $425.

The Greening Up the Mountains and Hook Line and Drinker festivals are $70 and $80, respectively.

Like the original game, players are subject to hazards, some of which are Sylva-centric. Players can be penalized for staying too long in public parking. In this version, instead of going to jail, unfortunate victims are stuck in traffic. But don’t worry – there is a get out of the traffic jam free card.

“You ate too many fried green tomatoes at Lulu’s On Main! Lose one turn to recover” demands a Contingency card.

When the company is commissioned to create a game, they put a lot of research and work into making it as accurate as possible.

“We go to the city website, the chamber of commerce and find out what’s there,” said Michael Schulte, marketing director for Late For the Sky, the Ohio based company that produced the game.

“We cross reference it all on social media to make sure we’re not missing any festivals or events,” he said. “We’re not perfect, but for the most part, we’re pretty accurate.”

Anyone wanting to buy a copy should hurry, because supplies are limited. Late For the Sky on Jan. 9 delivered 360 of the games to Walmart.

Late for the Sky contracts with businesses, charities, schools, social groups and anyone else who would like to see a version of their business, group or town in a board game.

Late for the Sky made its first specialty game in 1984. The company’s founder was a Miami (Ohio) University graduate and made MIAMIOPOLY, based on the school.