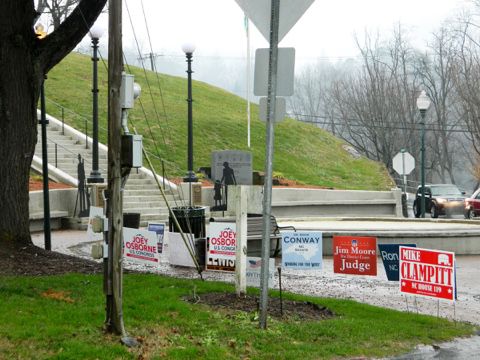 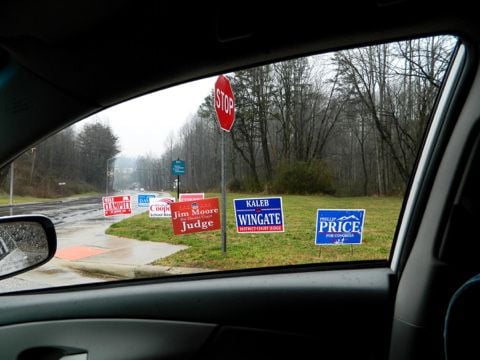 In 1970, Five Man Electric Band wrote the lyric, “Sign, sign everywhere a sign.” With election season here, that could soon be the case along a lot of roadways.

However, the N.C. Board of Elections and the town of Sylva have a few ordinances in place to keep the signs from “blocking out the scenery” as the song says.

Jackson County Board of Elections provides a pamphlet on guidelines for signage, but their involvement ends there.

“Election complaints concerning sign placement filed in the county boards are forwarded to the State Board to investigate,” said Lisa Lovedahl, board of elections director. “The County Board of Elections does not enforce campaign issues.”

For areas outside city limits, campaign signs can only be placed 30 days before one-stop voting begins; anything before that is a violation. The N.C. Department of Transportation has the authority to remove signs that violate guidelines.

Candidates must collect their signs by 10 days after a primary or after the general election.

If signs are left out longer than allowed, they can be treated as litter according to a statute that took effect in December.

The rule reads, “Any political sign remaining in the right of way of the state highway system more than 40 days after the primary or election is deemed unlawfully placed, and a person may remove and dispose of such political sign without penalty.”

There are laws regarding the size of campaign placards as well.

Signboards should be no larger than 864 square inches. For a square sign, that is just under 29.4 inches per side.

Signs cannot be placed wherever the candidate or campaigner wants.

They cannot be more than 42 inches above the pavement along a road, and they must be at least 3 feet away from the edge of the road. Political advertisements are not allowed to interfere with drivers’ visibility at an intersection.

When placing signs on private property, campaigners must ask permission from the owners.

Tampering with campaign signs, including stealing, moving, defacing or vandalizing them is a Class 3 misdemeanor.

Stolen signs have not been a huge problem for the county according to Maj. Shannon Queen of Jackson County Sheriff’s Office.

“Over the election years we have had a few reports made by people with signs stolen and sometimes larger signs damaged,” he said. “I haven’t seen anything recently though.”

Anyone convicted of a Class 3 misdemeanor could face up to 20 days in jail and a $200 fine.

Municipalities are allowed to set their own ordinances concerning election signage.

Sylva’s ordinance on political signs prohibits placing signs in a public right-of-way. Signboards must be at least 15 feet away from the road surface “if no right-of-way is defined.” They cannot create a hazard to pedestrians or drivers.

Campaign placards cannot be greater than 4 square feet in District B-1 or any residential neighborhood. In district B-2 and B-3, signs can be up 32 square feet.

Within town limits signs can be erected up to 90 days ahead of an election, but candidates are required to remove signs within 10 days after elections. Candidates who win a primary election are allowed to keep political signs up until 10 days after the general election.