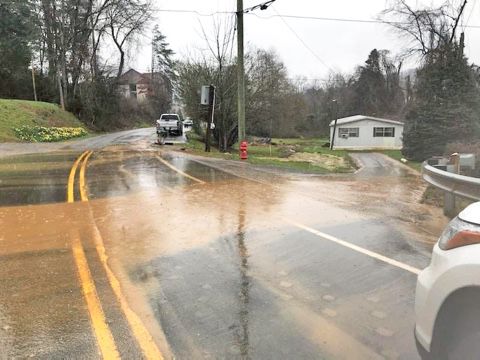 Muddy water streams across Blackhawk Road from Killian Road, the main entrance to the Millennial Apartments site, on Monday when rain fell. 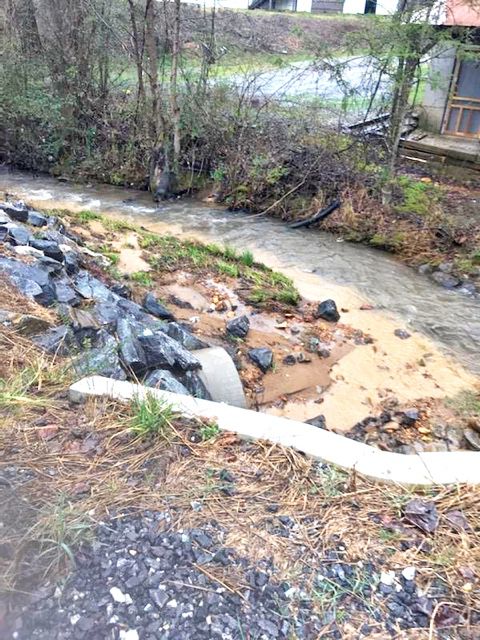 Runoff from the Millennial Apartments development in Cullowhee flows into the clearer waters of Long Branch during rains Monday.

Muddy water streams across Blackhawk Road from Killian Road, the main entrance to the Millennial Apartments site, on Monday when rain fell.

Runoff from the Millennial Apartments development in Cullowhee flows into the clearer waters of Long Branch during rains Monday.

Orange water and legal wrangling continue to swirl around the Millennial Apartments in Cullowhee, the site of mudslides, muddy streams and violation notices.

A Halloween landslide knocked a house off its foundation in Catamount Homes, downhill from the 500-bed complex off Blackhawk Road and Killian Road, across N.C. 107 from the main Western Carolina campus.

The apartment construction project is a public-private partnership between WCU and Wilmington-based Zimmer Development Co.

Ken Brown, executive director of the watchdog group Watershed Association of the Tuckaseigee River, used the word “remiss” in regards to both the developer and the state.

“The Department of Environmental Quality, both water and land divisions, should have been out there issuing notices of violation and they should have shut that place down,” Brown said. “State statutes would have supported that.”

Brown blames a process of “working with people” that the state agencies have for the prolonged problem.

“What that does not do is keep the mud and soil on the site and out of the waters of the county the construction is in,” he said.

Brown has kept a close eye on the situation.

“I’ve been over there every day it has rained,” he said. “I’ve never seen anything as poorly addressed as this situation.”

Still, things are looking up.

“I think we’ve gained a little traction now,” he said. “They’ve done some sitework and hopefully they are getting close to approaching compliance. That’s what we are shooting for.”

WATR will do a stream restoration of the creek that parallels Catamount Homes, he said.

Work is ongoing on the apartment complex.

“They have building permits and they are getting building inspections,” Jackson County Permitting and Code Enforcement Director Tony Elders said. “We’re investigating if we can do more, but that’s about all I can say at this time.”

Erosion control for the project is under the jurisdiction of the state, not the county.

“On the good news side, the other projects we are monitoring around the campus held up through the most recent rains and did not blow out or anything,” Elders said.

After repeated requests, the Division of Water resources furnished The Sylva Herald with the most recent communications between the state and the developers. The Division of Energy, Mineral and Land Resources has yet to respond.

On Dec. 17, Tim Fox from the Asheville Regional Office of the Division of Water Resources conducted a site inspection of the property.

The site inspection was in response to a report of turbidity in Long Branch, Fox stated in a letter to the developer, WCU and others.

Turbidity samples were collected in an unnamed tributary of Long Branch and in Long Branch.

Turbidity, or sediment, is measured in nephelometric turbidity units (NTUs). The standard for Long Branch should be 50 NTUs, Fox said.

Tests showed levels almost three times that standard at the confluence of Long Branch and its eastern tributary below the construction site.

On Jan. 14, the DWR received another report of turbidity in Long Branch. Fox returned and took turbidity samples again.

Fox sent a letter again to Zimmer and WCU, with a Feb. 5 deadline to respond.

1. The site must be stabilized immediately and/or sufficient erosion control measures installed to prevent ongoing water quality violations. The DWR is concerned that there have been additional documented stream standard violation events at this site since June 2019. Coordinate revised site stabilization plans with the Division of Energy, Mineral and Land Resources.

2. Provide further explanation for the pipe found discharging turbid water from the basin near the entrance of the project on Jan. 14. Your explanation is to include, but not be limited to, a description of the pipe’s purpose, installation date, when and why the pipe was capped, the duration of discharge, etc. Also include a description of any discussions, including dates, you may have had with Departmental staff, if any, regarding this pipe.

“These violations and any future violations are subject to a civil penalty assessment of up to $25,000 per day for each violation,” Fox wrote.

“The site conditions have continued to improve and stabilize through the establishment of grass on all exterior slopes and the implementation of additional measures,” he said.

Stormwater basins on the surface of the project were performing and the majority of the site is stabilized, he wrote.

“The eastern side of the site along Killian Road, which serves all site traffic, will require further attention. Killian Road appears to be the source of the turbidity that was observed by Mr. Fox. Traffic tracks dirt onto the road which is then carried by runoff through various paths off-site.”

The contractor is installing another construction entrance, utilizing a street sweeper for the paved roads, and regularly scraping Killian Road, Hoffman wrote.

The pipe in question had not sealed properly and had since been removed.

“The university’s foremost concern continues to be the safety and wellbeing of our students, faculty and staff and of our community neighbors,” WCU spokesman Bill Studenc said Tuesday. “University officials are disappointed that persistent heavy rains have resulted in additional erosion and runoff problems at the site of this project, and will continue to work with the developer and with Jackson County on efforts to prevent issues going forward and to ensure compliance with regulatory requirements.”