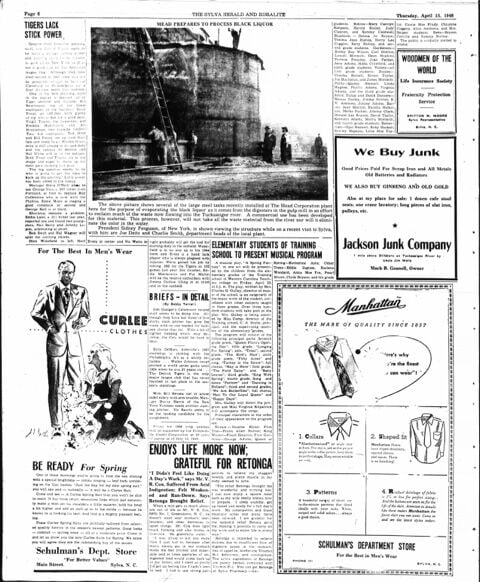 Large steel tanks were installed at the Mead plant in 1948 to evaporate the “black liquor” coming from digesters in the pulp mill in an effort to reclaim much of the waste being discharged into Scotts Creek. 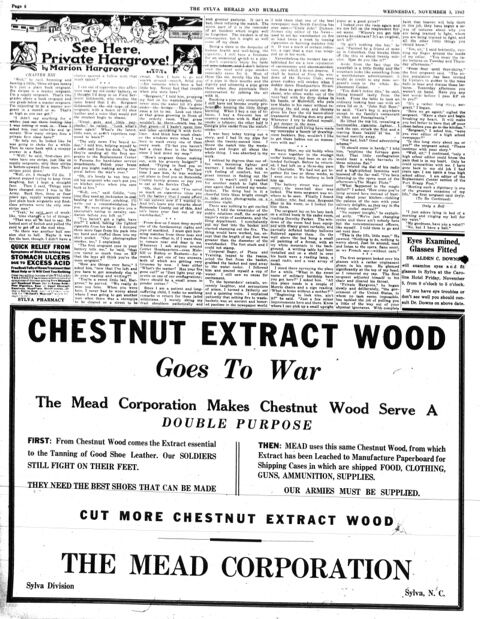 This ad from 1943 touted the value of Mead products in the war effort.

Large steel tanks were installed at the Mead plant in 1948 to evaporate the “black liquor” coming from digesters in the pulp mill in an effort to reclaim much of the waste being discharged into Scotts Creek.

This ad from 1943 touted the value of Mead products in the war effort.

As December 1927 dawned, Sylva and Jackson County were awaiting a visit from Santa.

He did indeed show up.

That was the month word came down that the Mead Paper Company – spelled “Meade” in the Jackson County Journal’s initial coverage – would be locating a huge paper plant in Sylva.

Spelling aside, the Journal was completely agog at the news, calling it “the most important business transaction for Sylva and Jackson County in many moons.”

It was estimated the new firm, which would take chestnut chips at the time being burned after being rendered of tannic acid, and instead transform them into paper products, would employ between 300-400 people.

The Journal speculated that Sylva would soon be the largest town in Western North Carolina west of Asheville.

It also reported “It is definitely stated on the highest authority that the paper mill at Sylva will have no offensive odor, as is often the case in paper mill towns; but that to the contrary, the process that will be used here will have no odor, and there will be even less discoloration of the water in the streams below the mill than is the case at present.”

To back up a bit, the area Mead was siting its new plant was in Sylva’s tannery area, where tannic acid was boiled from chipped chestnut wood for use in tanning hides to make leather for industrial uses and shoes. In the days before environmental regulations this was not the cleanest of processes, so the modern Mead plant was an upgrade in that regard.

However, the manufacturing process that was used discharged what was termed “black liquor” into Scotts Creek and on down into the Tuckaseigee River. Mead made efforts to curb that output but in 1957 it was still bad enough that a bill was filed by a Swain County representative in the N.C. General Assembly to order the plant to stop polluting the Tuck, which threatened Swain’s main industry, tourism. Mead changed its wood pulping processes in a move costing $2.5 million; the new process evaporated the waste product, reducing water pollution by 75 percent.

But it increased air pollution, to the point that some prankster placed a gas mask on the life-sized creche Mead had set up outside its plant to mark the Christmas season. Mead shut down its Sylva operation in 1974.

But while it was here, it did provide a massive economic boost. This week’s “Looking Back” notes that in 1950 the plant paid out holiday bonuses of $17,900 to its employees. That’s equivalent to nearly $195,000 today.

And its manufacturing legacy still provides plenty of jobs today. The facility was sold to Dixie Container Corp., which converted it to a 100 percent recycled operation. Tim Campbell and Jeff Murphy purchased the mill in 1995 and renamed it Jackson Paper Manufacturing Company, and it remains a vital local employer.