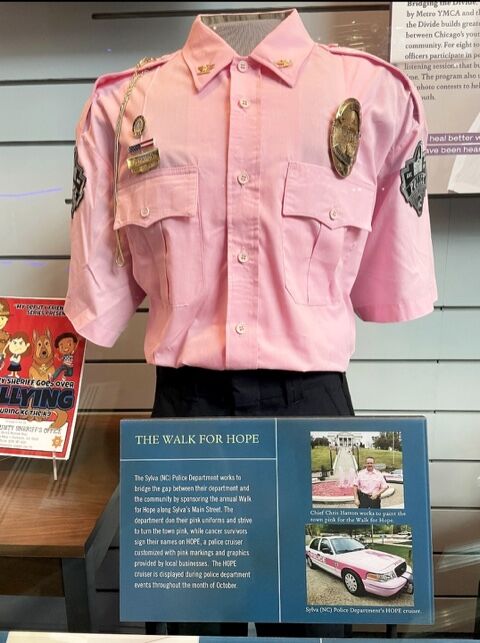 Sylva’s Walk for Hope, featuring pink shirts to raise breast cancer awareness, is featured in an exhibit on community policing in Washington, D.C. 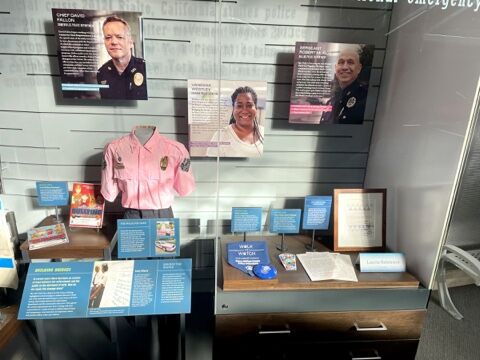 Sylva’s Walk for Hope, featuring pink shirts to raise breast cancer awareness, is featured in an exhibit on community policing in Washington, D.C.

A Sylva event is garnering some national attention thanks to its community policing efforts and a pink shirt.

The Walk for Hope, hosted each October by the Sylva Police Department to promote breast cancer awareness, is now featured in an exhibit on community policing at the National Law Enforcement Museum in Washington, D.C.

Curator Lily Ames reached out to Police Chief Chris Hatton in July saying they had heard about the event and the pink uniform shirt made especially for the event.

“It was humbling, I felt a real sense of honor; I was also excited for our police department to be recognized in a national museum,” Hatton said. “It’s such a big deal to me that something my agency started is going to be representing what good community policing looks like in a national museum.

“Chief Tammy Hooper started this event years ago, and I’ve tried to make it better and better each year,” Hatton said. “The shirt is just one part of this; it’s about celebrating the lives of these wonderful and strong women who have fought or are fighting against breast cancer.”

Along with the shirt, Hatton sent a badge, nameplate and other uniform shirt accessories to be displayed with pictures of him wearing the shirt in front of the fountain dyed pink for the walk and HOPE, the pink and white police cruiser decorated with pink striping and a breast cancer awareness ribbon.

Each year survivors sign the car to encourage others facing the disease.

The exhibit features a mannequin dressed in the uniform and a placard explaining the Walk for Hope.

“I think that’s a wonderful thing,” Hooper said of the exhibit. “I’m glad that he brought attention to the event. I’m grateful that Chief Hatton continued the Walk for Hope.”

The museum has curated thousands of artifacts such as handwritten letters and police blotters, photographs, artifacts from well-known crimes, policing equipment and uniforms. Now SPD’s pink shirt is there as well.

Hatton had the shirt made to wear when he decided to continue the Walk for Hope tradition.

The Walk for Hope began in 2017 to bring awareness to breast cancer. It was spearheaded by Hooper, then Assistant Chief Rick Bryson and Mayor Linda Sossamon.

“It was actually the first thing I did as chief,” Hooper said. “I was sworn in on the 14th of September, and that was the first community event that I actually did. I thought that was the coolest thing because I was a female and I wanted to help other females.”

Hooper wanted the pink car to serve as a reminder for women to get mammograms.

“Usually when people see a police car, most people put their foot on the brake,” she said. “They stop and they think, so I wanted them to see that pink patrol and think ‘Have I had my mammogram this year?’”

The walk is a chance to spread information on the importance of mammograms for women and men and to celebrate the women who have fought the disease.

She also wanted survivors to know SPD supports them. Several members of the department have family members who have contended with breast cancer.

“It’s one of the most memorable things I did as chief,” she said. “It is very humbling.”

When Hatton took over in 2019, he wanted a special way to show the department’s support for survivors and those lost to breast cancer. He expressed a desire to have a pink uniform shirt. Bryson began searching and couldn’t find one. They contacted Read’s Uniforms in Asheville who reached out to uniform manufacturer Blauer. Blauer agreed to make the shirt free of charge.

Blauer told Hatton that the shirt is one of a kind as far as they know.

Read’s is working to have another shirt made in time for this year’s Walk for Hope.

The unique shirt landed SPD’s event in the pages of International Association of Chiefs of Police magazine in 2020.

Hatton never thought the shirt would receive this much attention.

“Not at all,” he said. “The purpose of the shirt was to show our survivors how much the men and women at Sylva PD support them.”

SPD Walk for HOPE stands as example of community policing