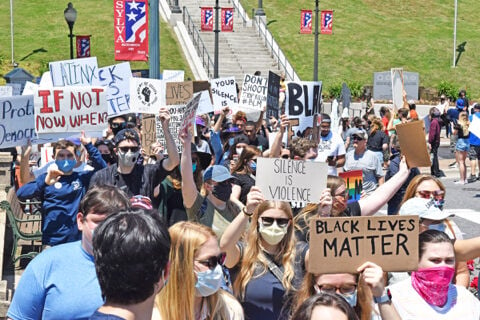 Hundreds of people marched in Sylva on Tuesday to protest the death of George Floyd. 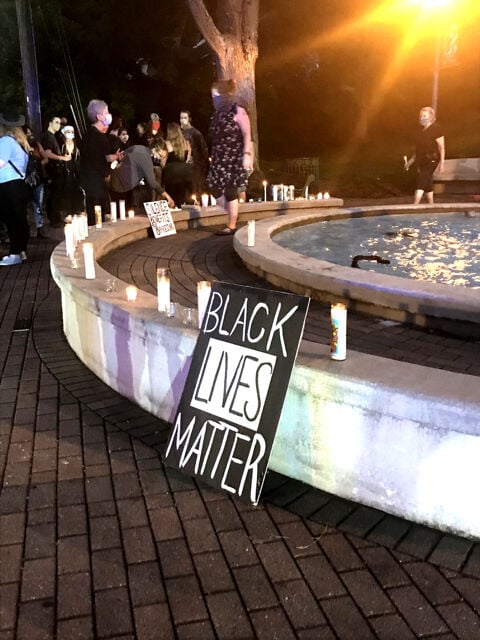 A vigil was held Sunday at the courthouse fountain as well.

Hundreds of people marched in Sylva on Tuesday to protest the death of George Floyd.

A vigil was held Sunday at the courthouse fountain as well.

People lit candles, marched, chanted and prayed at a pair of Sylva events dedicated to the memory of George Floyd and an end to the type of violence that killed him.

Floyd, an African American and North Carolina native, died on Monday, May 25 when Derek Chauvin, a white Minneapolis, Minnesota police officer, knelt with his knee on Floyd’s neck for almost nine minutes. Floyd was under arrest for allegedly using a counterfeit $20 bill.

Chauvin has been charged with third-degree murder and manslaughter,

“We just posted the event on Sunday morning,” organizer Betsy Swift said. “We expected a small crowd of six or eight but at about 6:30 p.m. noticed on Facebook that over 230 people had responded ‘going’ or ‘interested.’”

Swift estimated the crowd to be at least 300, she said.

Hatton agreed it was a big crowd.

“I’d say about 200,” he said. “We anticipated that and we routed traffic down to one lane so no one would get hit by a car. We didn’t have any issues, no arrests, no citations.”

A group of men, later identified as members of the Sons of Confederate Veterans Camp 1917-Jackson Rangers, showed up around the Confederate soldier monument about halfway up the courthouse steps to keep an eye on it, Hatton said.

“They weren’t standing around guarding it, they were sitting on the benches there,” he said. “They mostly sat on the benches and talked and laughed.”

Two men who appeared to be part of the protest had AR-15 rifles strapped across their backs, Hatton said.

“They didn’t appear to be counter-protesters,” he said. “These were people participating in the vigil, seemingly. One of them had a big peace sign around his neck. It freaked some people out but they didn’t cause any problems.”

The event began with a bell ringing with a moment of silence afterward.

The crowd dispersed peacefully at about 9 p.m.

Natalie Newman, owner of Natalie Nicole Boutique + Salon in downtown Sylva, was one of the last to leave the event, she said.

The event and the support of the community meant a lot to Newman, an African-American woman.

“I’m glad I spent my evening in downtown Sylva with the people in my community at least for that hour,” she said. “It was the first time in the last couple of days that I actually felt relieved. It was meditative to me. It felt good to see the support, which we all need right now.”

Newman spoke both before and after Tuesday’s Solidarity March.

A crowd estimated at between 300 and 400 met at the fountain at noon with the heat index at 85.

Newman told the crowd she was pleased with the support and asked them to behave while in Sylva.

“Please do not litter, please do not fight with one another, and do not say hateful things,” she said. “There might be people in our vicinity who do not support why we’re here today. That is their right and it is our right to be here as well.”

Meanwhile, up the hill, about a dozen members of the Sons of Confederate Veterans Camp 1917-Jackson Rangers gathered around the Confederate soldier monument. The Sons boast about 350 members in the Jackson County area, Commander James Parris said.

The group has concerns about the statue being vandalized.

“In the last few days, protesters have painted them and done everything they can do to damage them,” Parris said. “I’m not saying this bunch is bad at all. I don’t have a problem with anything they are doing. They have every right in the world to do what they are doing. They just don’t have the right to tear down stuff, bust windows and stuff like that. The only thing we’re concerned with is the statue and we’re just here to make sure they don’t hurt it.”

Chants of “No justice, no peace!” and “Say his name! George Floyd!” rang out as the crowd turned onto Mill Street and headed to Bridge Park.

The chanting crowd gathered in front of the gazebo.

“I cannot thank you enough for being peaceful and showing that Sylva can be peaceful,” she said. “I’m bringing a biracial child into this world, and I want the father of this child and this child to be surrounded by people like you, who are willing to speak up when other people are speaking against.

“Do not forget to vote. Every one of you can take this further,” she said. “You can continue to speak out against the atrocities in this country.”

Hatton was pleased with the way the event unfolded.

“I’m very proud of our community for honoring the life of George Floyd and for conducting themselves in such a positive manner,” he said. “My officers said they enjoyed interacting with the friendly crowd. They received far too many thank- yous to count.”

Officers from the WCU Police Department and Jackson County Sheriff Chip Hall and deputies from his department assisted with crowd control, Hatton said.