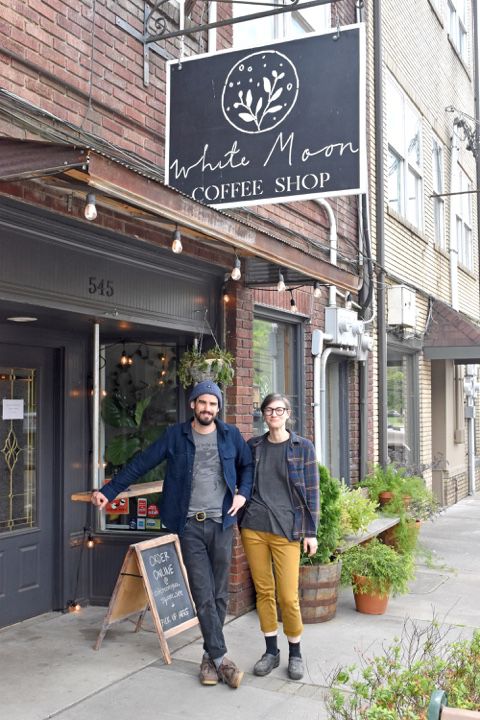 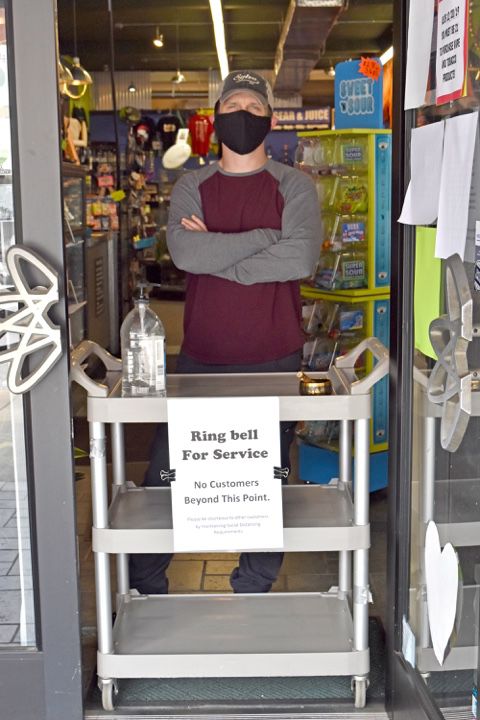 In Your Ear Music Emporium Manager Jason McMahan mans the desk in the store’s doorway. Customers will be asked to “shop with their eyes” when they are welcomed into the store again.

In Your Ear Music Emporium Manager Jason McMahan mans the desk in the store’s doorway. Customers will be asked to “shop with their eyes” when they are welcomed into the store again.

Though microscopic, the coronavirus was powerful enough to slam shut the doors of businesses around the world. Jackson County was not immune, but Sylva is slowly – and carefully – re-opening its doors to shoppers and diners.

In Your Ear Music Emporium offers walk-up service for the foreseeable future.

“We’re staggering how we’re doing things,” store Manager Jason McMahan said. “We’ll be at least two weeks behind what the state allows just to be on the safer side.”

When they decide to remove the service table from in front of the door, shoppers would be limited to five at a time with masks required, he said.

“If you actually want to flip through records and stuff, we are going to provide gloves,” McMahan said. “We’re asking people to shop with their eyes as much as they can.”

“I had so many people in here,” owner Violetta Ohliger said. “I thought I was just going to come in and clean up, but I did extremely well. I think people are anxious to be out of their houses. I’m expecting the best.”

Facebook and phone inquiries about the store have picked up in recent weeks, she said.

“We’re implementing a pickup system,” said Patrick Toomey, an employee of the outdoors shop. “If people don’t want to come in they can call ahead and we’ll take payment via Venmo or PayPal and we’ll bring their order out to their car or leave it outside for them.”

The store is open Wednesdays through Saturdays, 10 a.m. until 5 p.m.

On Mill Street, White Moon never closed, serving up coffee, smoothies and vittles from a table in the front door.

“We never took a break,” co-owner Don Panico said. “Business was a little weird at first and now it is starting to somewhat normalize, as much as it can while being a takeout spot. We’re basically rolling with the punches. We don’t know how to feel about re-opening when things are allowed to officially open up. Masks and the service industry don’t really mix.”

Panico and co-owner Cecilia White have asked the town to let them put a few bistro tables on the sidewalk for customers who want to sit down, he said.

The Table Restaurant at 646 W. Main St., described by owner Dawn Kluver as a “made-from-scratch eatery,” was slated to open in April. They were close to being ready when COVID-19 hit.

“But it didn’t pay to open for takeout, not being known and just getting started out,” Kluver’s husband, Jon, said.

The couple had a staycation and worked on the restaurant interior, he said.

“We are now starting to regroup, try new recipes, begin marketing efforts, and analyze what changes The Table needs to make in what may be a very different environment,” Dawn Kluver said.

Crystal Pace and her husband, Santiago Guzzetti, are working with The Wine Cellar while their own restaurant, Ilda, is under construction on the other side of the east wall.

“When we can, we’re going to offer the wine and snacks, so it will be The Wine Cellar and Ilda together,” Pace said.

“We’re going to serve things like cheese boards and olives, little snacks so you can have a glass of wine and enjoy an appetizer,” Guzzetti said.

They will expand offerings after Phase II of the state re-opening plan is in effect, tentatively set for 5 p.m. Friday.

They plan to open on a reservation basis to limit the number of people inside, Pace said.

As for Ilda, a project Pace and Guzzetti started late last year in the building that once housed restaurants Mill and Main and Meatballs, COVID-19 put it on hold.

“It will eventually happen,” said Guzzetti, who will take the apron as Ilda’s chef while Pace will serve as sommelier.

She has had some good days since re-opening, she said.

“I’ve been pleasantly surprised by how many are out the past few days,” Newman said. “I’m looking forward to another good weekend, hopefully. We need as much as we can get right now after being closed for so long.

“We are recommending masks, but we are not requiring it,” she said. “We’re sanitizing between customers, like the card reader and signature pad, just sanitizing as much as possible.”

Peebles, at 670 W. Main St., was slated to re-open as a Gordmans, with a plan to give the first 100 shoppers in line at the March 31 grand opening a Gordmans insulated tote bag. COVID-19 squashed that idea, and last week parent company Stage Stores filed for Chapter 11 bankruptcy.

In a statement, Stage said it plans to re-open and liquidate its stores. The Sylva Peebles lists store hours as 11 a.m.-7 p.m. Monday-Saturday and noon until 5 p.m. Sunday.

He said he “highly recommends calling ahead before visiting area businesses, as many of them are not open ‘normal’ hours and days yet.”

“For Rent” signs are on the windows of the former Humanite Boutique, the upscale women’s clothing store at 633 W. Main St.

Over in Dillsboro, the pandemic led Kosta’s Family Restaurant to become Kosta’s Express Restaurant, which will do away with table service.

According to a May 15 Facebook announcement, the restaurant “will be going from a full-service restaurant to a quick service restaurant ... It was still a hard decision knowing many jobs would be lost but it is the only option we have in order for us to not close our doors for good.”

Kosta’s will be closing down for two to four weeks to remodel areas of the establishment to provide the quicker service when they reopen, the post said..