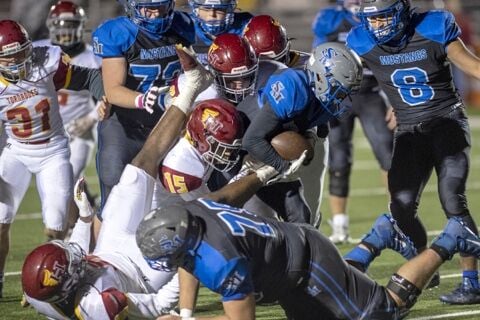 Smoky Mountain’s Isaiah McNeely drags tacklers with him on the way to gaining 328 yards in Friday’s 37-34 loss to Hickory in the state playoffs. 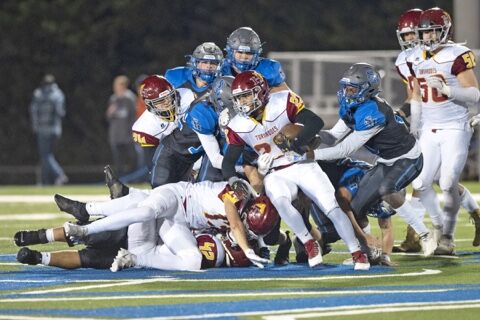 Smoky Mountain’s Isaiah McNeely drags tacklers with him on the way to gaining 328 yards in Friday’s 37-34 loss to Hickory in the state playoffs.

Hickory outlasted Smoky Mountain 37-34 Friday in the first round of the state 3-A football playoffs at Carr Hooper Stadium/Babe Howell Field.

The Mustangs ended the season 7-3 for their best winning percentage since the 1992 team went 9-3.

Turner Wood completed 16 of 24 passes for 166 yards and three touchdowns for the 21st-seeded Tornadoes. Tyquan Hill and Dontae Baker both had five catches for 51 and 37 yards, respectively.

Isaiah McNeely had another monster night for the 12th-seeded Mustangs. He carried a school-record 45 times for 328 yards and five TDs. He ended the season with school records of 2,086 rushing yards and 31 rushing TDs.

Jed West completed seven of 13 passes for 61 yards. All of the receptions were by Darien Bird.

SM trailed most of the night but had a chance to win, or at least move into position for a tying field goal, after forcing a punt and taking over at its 26 with 3:54 on the clock.

On first down from midfield with less than two minutes remaining, West fumbled when hit while attempting a pass, and Hickory recovered at the 32 for an 18-yard loss. The Tornadoes then ran out the clock.

The Mustangs marched 64 yards in seven plays following the opening kickoff. McNeely had a run of 11 yards, and Bird caught a 12-yard pass from West. McNeely scored on a 33-yard run, and Zeke Sink’s extra point made it 7-0 with 9:20 to play in the first quarter.

Landon Maddox returned a short kickoff 29 yards to the SM 39. Wood completed a 10-yard pass to Baker, before Edwards scored on a 13-yard run. Jamien Little, who was three of three on extra points, made it 7-7 with eight minutes to go in the first period.

SM looked ready to regain the lead after a 36-yard run by McNeely. However, a potential touchdown pass was dropped, and Hickory later took over on downs at the 18.

The Tornadoes faked a punt and came up 3 yards short, but a personal foul penalty allowed them to maintain possession. Edwards had a 15-yard run ahead of Wood’s 12-yard TD pass to Melvin Dula for a 14-7 lead with 9:46 left in the half.

Hickory marched down field behind the passing of Wood, who had completions of 11 yards to Hill and 12 yards to Baker. Wood hit Dashawn Medley for a 24-yard TD with 25.1 seconds on the clock. After a penalty moved the ball half the distance to the goal, the Tornadoes went for two, and Edwards’ conversion run gave his team a 22-14 halftime lead.

The Tornadoes moved 68 yards in eight plays to start the second half. Wood scrambled for 13 yards then found Hill for a 16-yard TD. Using a swinging gate play, Medley ran for the conversion extending the margin to 30-14 with 10:15 remaining in the third quarter.

McNeely’s 5-yard run capped a 54-yard drive in eight plays cutting the gap to 30-20 with 6:23 to go in the third period. A conversion pass failed.

Following a punt, SM marched 80 yards in six plays. McNeely had runs of 26 and 36 yards on consecutive plays before scoring from the 2. Sink missed the extra point leaving the deficit 30-26 with 1:45 to play in the third quarter.

Hickory countered with a 68-yard drive in 11 plays. Highlights included Edwards’ 23-yard run and a 19-yard pass from Wood to Medley. Lackey scored on a 5-yard run building the lead to 37-26 with 9:10 on the clock.