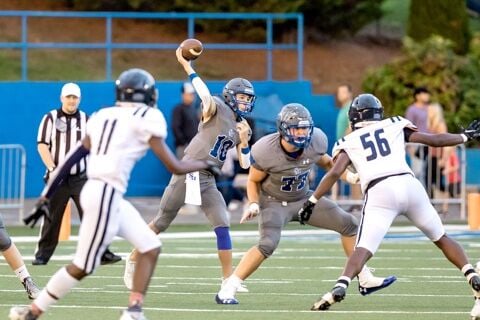 Smoky Mountain quarterback Jed West completed 13 of 16 passes for 171 yards and a touchdown in Friday’s 35-12 win over Roberson. 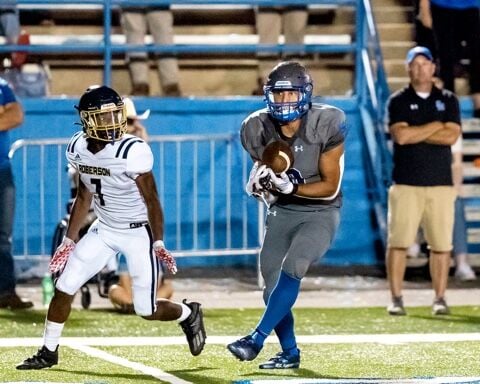 Smoky Mountain quarterback Jed West completed 13 of 16 passes for 171 yards and a touchdown in Friday’s 35-12 win over Roberson.

Isaiah McNeely scored on a 59-yard run on the game’s first play Friday, and Smoky Mountain went on to a 35-12 non-conference football victory over Roberson at Carr Hooper Stadium/Babe Howell Field.

Jed West completed 13 of 16 passes for 171 yards and a score. The TD pass went to Darien Bird, who had nine receptions for 120 yards.

Zeke Sink kicked the first of his five extra points after McNeely’s opening TD for a 7-0 lead 15 seconds into the game.

The Mustangs (2-1) forced a three-and-out then marched 73 yards in 12 plays. The highlight was a 42-yard pass from West to Bird. McNeely had a 12-yard run in the march, which ended with West scoring from a yard out for a 14-0 margin with 3:51 to play in the first quarter.

Roberson kept the ball for 14 plays before White fumbled with Colin Crowe recovering at the 9.

The ensuing 10-play drive was aided by three penalties, including a 15-yarder. The key play was a 40-yard pass from West to Brylen Conlin. McNeely scored on a 4-yard run on the next play making it 21-0 with 5:37 to go in the half.

Roberson cut the gap to 21-6 on White’s 17-yard run with 1:51 on the clock. A conversion run was no good. The seven-play, 76-yard drive was helped by a penalty. It included a 14-yard run by White and his 19-yard pass to Reno Jeter for the Rams’ only completion of the night.

Roberson was forced to punt to start the second half but got a break when Brett Richmond fumbled the kick and Khalil Chung recovered at the SM 31.

Hollis scored on a 3-yard run five plays later bringing the Rams within 21-12 with 6:54 left in the third period. A conversion run was again no good.

The Mustangs drove to the 23 following the kickoff before being stopped on downs.

They got the ball back after a punt and needed just two plays to score as McNeely ripped off a 53-yard TD for a 28-12 lead with 10:44 remaining in the game. Four plays after the kickoff, Jeter fumbled with Jay Lacy recovering at the Roberson 47.

Bird caught a 42-yard pass from West on the next play. After a loss two plays later, the pair connected again on an 11-yard TD pass to account for the 35-12 final at the 6:40 mark.