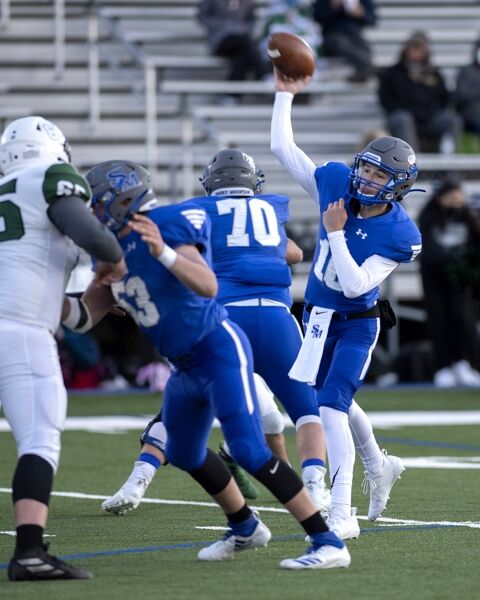 Smoky Mountain freshman quarterback Jed West made his first varsity start Friday and threw for 196 yards and four touchdowns in a 63-0 rout of East Henderson. 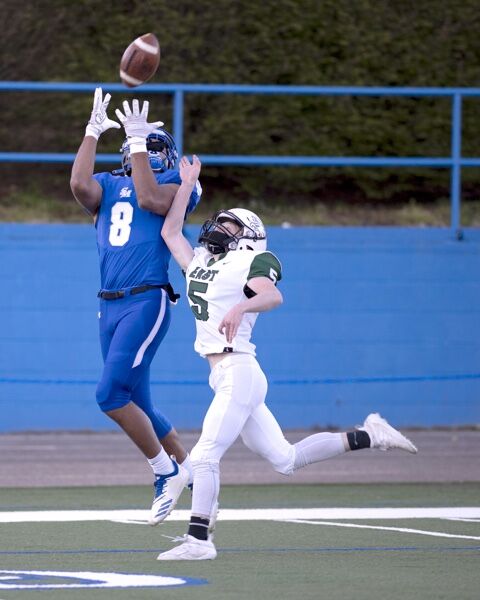 Smoky Mountain freshman quarterback Jed West made his first varsity start Friday and threw for 196 yards and four touchdowns in a 63-0 rout of East Henderson.

The score was 42-0 after the first quarter, and a running clock was in effect the entire second half.

West, who was playing in place of the injured Chris Wilburn, completed eight of 10 passes. Darien Bird had five catches for 138 yards and three TDs.

The Eagles were limited to 7 yards of total offense, including -20 on the ground. They fumbled 11 times and lost seven. At one point over two series, East fumbled on four straight plays.

West made his presence felt from the beginning as he completed a 50-yard pass to Bird on the game’s first play. The pair hooked up again on a 4-yard TD on the next play. Hunter Pressley, who was seven of seven on extra points, made it 7-0 just 17 seconds into the game.

SM got the ball back when Colin Crowe recovered Mason  Anders’ fumble at the Eagle 45. Stephens picked up 21 yards, and West completed a 24-yard TD pass to Bird making it 14-0 with 9:34 to play in the opening period.

The defense scored the first of its two TDs when Lawson Wike recovered Tanner Allison’s fumble in the end zone upping the margin to 21-0 with 9:09 on the clock.

Stephens recovered Anders’ fumble at the East 25. Two plays later Stephens scored on a 20-yard run for a 28-0 advantage with eight minutes on the clock.

On the first play after a short punt, West found Bird on a 30-yard scoring strike building the lead to 35-0 with 5:58 to go in the quarter.

Wike recovered another Anders fumble giving the Mustangs possession at the 24. Following a big loss on a bad snap, West completed a 30-yard pass to Bird. Stephens scored on a 4-yard run for a 42-0 lead at the 3:06 mark.

West completed a 16-yard pass to Brett Richmond on SM’s next possession. A 37-yard pass from West to Stephens made it 49-0 with 11:28 remaining in the half.

The halftime margin was 56-0 after Davey Mathis recovered Isaac Burleson’s fumble and returned it 65 yards for a TD with 6:52 on the clock.

The only score of the second half came when Stephens went over from a yard out with 8:01 to go in the third period. It came one play after his 65-yard run. The TD was set up by Richmond’s interception of Joseph Justice’s pass.

Ryder Huffman and Lincoln Sutton had fumble recoveries in the second half.