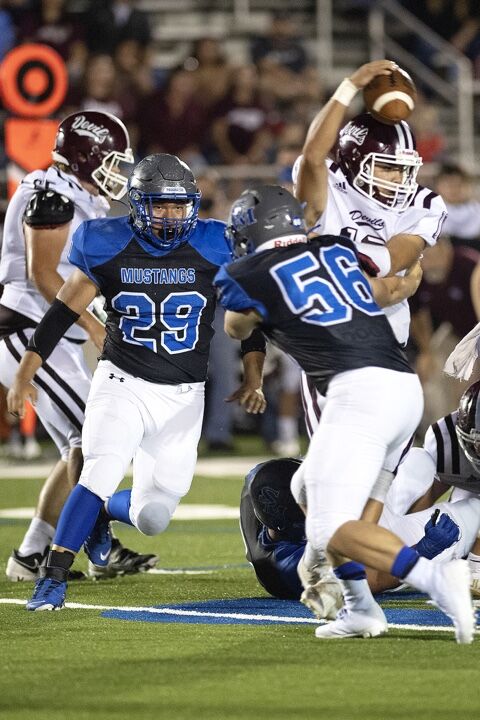 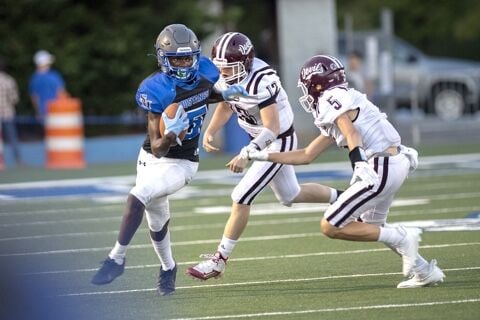 SM had issues with two center snaps which lost big yardage and led to a pair of Swain touchdowns. The team lost three of its seven fumbles and had 11 plays for negative yards. The two problems on snaps totaled 54 lost yards. As a result, the Mustangs managed just 28 net rushing yards.

Meanwhile, the defense held the Devils in check most of the night. One of the three touchdowns came on a fumble recovery in the end zone. The others were on drives of 19 and 40 yards.

Isaiah McNeely had 105 yards in 21 carries for the Mustangs.

Both teams punted on their first two possessions before the Devils got the first break of the game. A problem with the snap with a man in motion resulted in the ball being mishandled and rolling free until Swain’s Donnavin Groenewold recovered at the 19 for a 25-yard loss.

The Devils would have faced a fourth-and-5, but a personal foul penalty resulted in a first-and-goal. Collins scored on a 9-yard run, and Gavin Lanning kicked the first of his three extra points for a 7-0 lead with 1:25 remaining in the first quarter.

Reece Winchester’s 21-yard punt return gave Swain good field position at the SM 40. Three plays later, Lillard was wrapped up 5 yards past the line of scrimmage. However, he pitched the ball to Collins, who competed the 25-yard TD for a 14-0 advantage with 10:15 to go in the half.

The Mustangs got on the board with a 59-yard drive in seven plays. McNeely had a pair of 15-yard runs in the march, the second of which went for a TD. Zeke Sink’s extra point cut the gap to 14-7 with 7:03 on the clock.

After an exchange of punts to start the second half, Swain drove to the 29 before being stopped on downs.

On the next play, the snap sailed over the quarterback’s head. The ball rolled into the end zone where Nathan Bogdanovicz recovered for a Devil TD and a 21-7 margin with 4:25 to play in the third period.

SM reached the red zone on its next two possessions but came up empty both times. A 23-yard pass from West to Bird and a 13-yard run by McNeely keyed a drive that ended at the 12.

On the next possession, West completed passes of 21 yards to Matthew Brown and 14 and 10 yards to Brylen Conlin. After having first-and-goal at the 3, the team was stopped on downs at the 4.

Rather than risking a punt from the end zone, Swain took an intentional safety leaving the score 21-9 with 2:47 left in the game.

The Mustangs’ final chance to score following the free kick ended when Bird fumbled after catching a 22-yard pass from West, and Cooper Hyatt recovered at the 26.