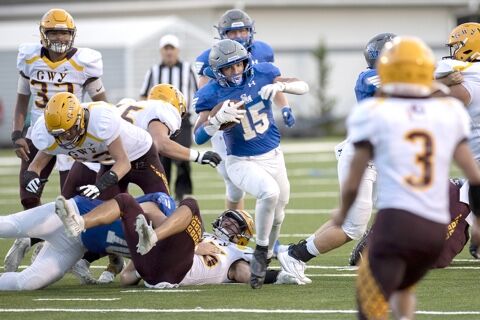 Smoky Mountain sophomore Isaiah McNeely made his first varsity start Friday and responded with 163 yards and three touchdowns in a 41-13 win over Cherokee. 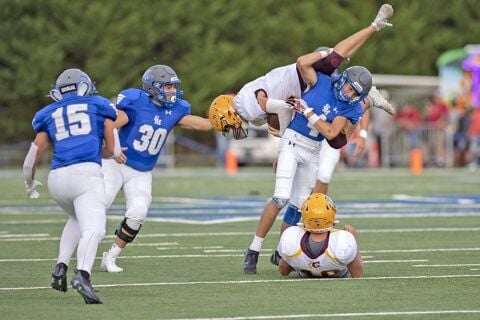 Smoky Mountain sophomore Isaiah McNeely made his first varsity start Friday and responded with 163 yards and three touchdowns in a 41-13 win over Cherokee.

Darien Bird had five receptions for 103 yards and a TD.

The Mustangs drove 72 yards in 10 plays on their first possession. The big play was a 38-yard pass from West to Bird. West also completed 12-yard passes to Bird and Da’Mare Williams. McNeely scored from the 2 with 3:13 to play in the opening quarter. Zeke Sink, who was five of six on extra points, made it 7-0.

SM responded by driving 68 yards in 11 plays to take the lead for good. McNeely had a 16-yard run, and West completed passes of 17 yards to McNeely and 12 yards to Williams. McNeely scored from the 3 for a 14-7 advantage at the 6:17 mark.

The Mustangs threatened to score again after a 39-yard run by McNeely, but a sack and penalty moved them back. West’s pass into the end zone on fourth down was intercepted by Michael Driver.

On the first play after a short punt, West completed a pass to Bird, who ran over a defender and turned it into a 39-yard TD for a 21-7 margin with 47 seconds on the clock.

On the first play of the second half. West hit Brylen Conlin on a 40-yard pass. McNeely scored from the 10 increasing the lead to 27-7 with 11:11 to play in the third period. The extra point was no good.

Cherokee drove 71 yards in six plays, including a 40-yard pass from Bradley to Kaden Trantham and an 11-yard run by Malakai Fourkiller-Raby. Bradley picked up a fumbled snap and scored on a 13-yard run cutting the gap to 27-13 with 8:02 remaining in the third stanza. A conversion run came up short.

Elijah Watty fumbled the kickoff, and Matthew Brown recovered at the 16. The Mustangs gave the ball back when Cameron Sampson recovered Williams’ fumble at the 6.

Cherokee drove to the SM 29 before Bradley was stopped for a 6-yard loss by Antonio Lorenzo on fourth down at the 35.

SM was forced to punt, but Trantham fumbled the kick with Lincoln Sutton recovering at the 26.

Jesse Jones went over from a yard out to complete the scoring with 3:14 on the clock.