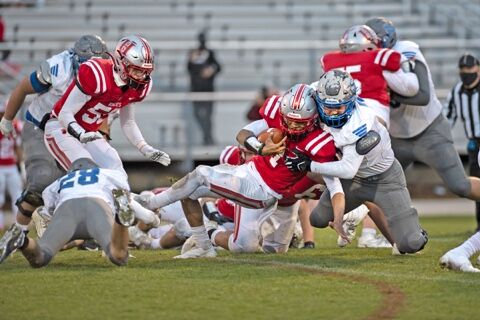 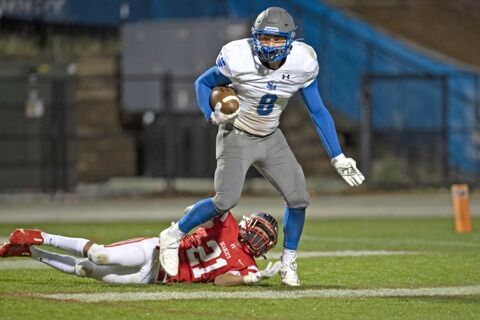 Gaines carried 24 times for 151 yards as the Bearcats rallied from a 14-0 halftime deficit. He also caught three passes for 34 yards.

Gavin Gosnell completed 10 of 16 passes for 157 yards. He carried three times for 47 yards.

Darien Bird had a big game with eight catches for 126 yards and two scores.

The TD passes were from Chris Wilburn, who completed 13 of 18 passes for 178 yards with an interception.

Hendersonville was limited to 44 yards of total offense in the first half but had 282 yards after intermission.

The turnaround began immediately after halftime. Glover completed passes of 14 yards to Rasheed and 11 yards to Gaines, and Gaines had a 34-yard run in the 75-yard, seven-play drive. He scored from the 2, and Cooper King kicked the first of his five extra points cutting the gap to 14-7 with 9:20 to play in the third quarter.

SM drove to the 21 before Wilburn fumbled with C.J. Landrum recovering at the 26.

Gosnell completed passes of 42 yards to Mills and 15 yards to Rasheed on the next two plays, and Gaines had a 10-yard run. He capped the six-play march by scoring from the 1 for a 14-14 tie at the 2:52 mark.

The Mustangs responded with a 76-yard drive in 10 plays, including a 27-yard pass from Wilburn to Bird. On fourth-and-8, the pair hooked up again as Bird made a spectacular 35-yard TD catch. A high snap on the extra point threw off the timing, and Hunter Pressley’s kick was blocked leaving SM up 20-14 with 10:38 to go in the game.

The lead lasted only three plays. Glover completed a 21-yard pass to Mills, and Gaines had a 43-yard TD run giving his team a 21-20 edge with 9:39 on the clock.

On the first play after the kickoff, a fumbled handoff from Wilburn to Stephens gave Hendersonville possession again at the 21 Gaines had an 11-yard run then scored from the 1 upping the margin to 35-20 with 4:14 to play.

Both teams committed turnovers on their first possessions. Isaac Payton picked off Wilburn’s pass on the game’s second play. The Mustangs got the ball back moments later when Rocky Magestro recovered Gaines’ fumble at the Mustang 46.

SM had a 10-play drive, including a 13-yard run by Stephens and his 4-yard gain on fourth-and-3. Wilburn’s 4-yard TD run and Pressley’s PAT gave the Mustangs a 7-0 lead with 2:07 to play in the first period.

A snap over the quarterback’s head as Hendersonville was going for it on fourth down was recovered by SM’s Davey Mathis at the Bearcat 41.

Wilburn picked up 5 yards on fourth-and-3. A 27-yard TD pass from Wilburn to Bird with 19 seconds on the clock gave the Mustangs a 14-0 halftime lead.