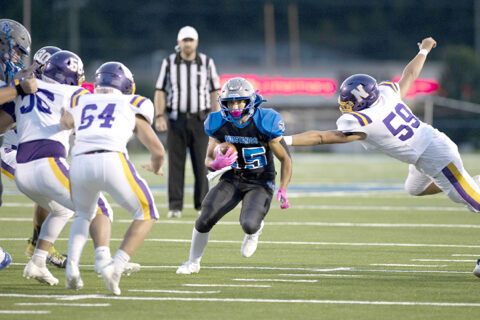 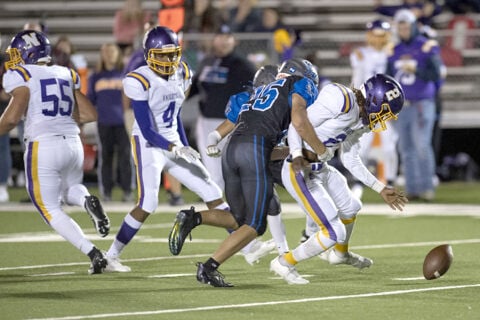 The sophomore equaled the mark set by Jason Mingus in 1993.

North’s Hazahn Collington gained 80 yards in 11 carries, all in the first half. Mason Gasperson had 72 yards in 20 attempts.

The Mustangs (3-2, 1-1) scored on their first possession after Brett Richmond’s 21-yard punt return to midfield. McNeely went for 27 yards on the first play and scored from the 18. Zeke Sink, who was seven of seven on extra points, made it 7-0 with 9:59 to play in the first quarter.

Four plays after the kickoff, Willis completed a 39-yard TD pass to Croft cutting the gap to 7-6 with 8:22 on the clock. The extra point was no good.

The Knights got the ball right back when Da’Mare Williams fumbled and Drake Blackwell recovered at the 47. Collington raced 53 yards to the end zone on the next play. Esteban Sanchez kicked the extra point putting North up 13-7 at the 7:22 mark.

The Knights reached the SM 28 on their next possession before being stopped on downs, but they again got the ball back on a fumble. Jonathan Costley recovered the ball at the North 18 as Brylen Conlin fumbled after catching a pass from West.

North gave the ball back three plays later when Williams recovered Collington’s fumble at the Knight 44.

West completed passes of 23 yards to Bird and 10 yards to McNeely. McNeely capped the drive with a 4-yard run putting the Mustangs ahead to stay, 14-13, with 11:23 to go in the half.

The Knights answered with a 65-yard drive in nine plays. Willis’ 16-yard TD pass to Croft and Sanchez’s extra point narrowed the deficit to 21-20 at the 1:55 mark.

McNeely’s 41-yard kickoff return put the Mustangs in position to score again before halftime. He had runs of 14 and 10 yards before West completed a 14-yard pass to Bird. The duo hooked up again on an 8-yard TD toss for a 28-20 lead with 28 seconds on the clock.

SM marched 52 yards in 10 plays after stopping North on downs in the second half. McNeely had a 12-yard run, and West completed a 12-yard pass to Bird. West scored on a quarterback sneak from a yard out for a 35-20 advantage with 2:31 to go in the third quarter.

Max Buchanan had the Mustangs’ first interception of the season as he picked off a Willis pass and returned it 45 yards to the 1. McNeely scored on the next play for a 49-20 lead at the 4:01 mark.

The Knights completed the scoring on a 1-yard run by Willis with 23.6 seconds on the clock. A conversion pass failed. Willis completed passes of 22, 18 and 15 yards to Croft in the drive.