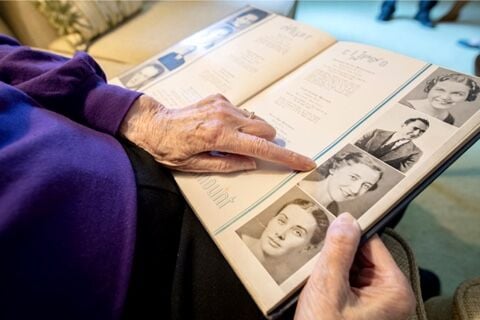 Sally Campbell points to her picture in her “Catamount” yearbook. Campbell was a 1937 graduate of Western Carolina Teachers College, 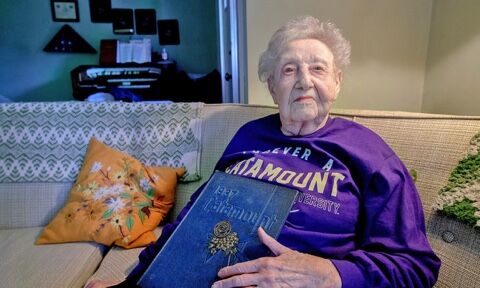 Sally Campbell points to her picture in her “Catamount” yearbook. Campbell was a 1937 graduate of Western Carolina Teachers College,

It’s been 84 years since Sally Campbell got her undergraduate degree from Western Carolina Teachers College, but she can still remember it like it was yesterday.

“I had a great time when I was a day student at Western. It was so close to home. But it’s changed so much now,” she said during a brief interview inside of her Sylva home where she has lived for decades.

A 1937 graduate of the teacher’s college, which is now Western Carolina University, Campbell still owns her “Catamount” yearbook and recounted memories recently of finishing in a senior class that went through the Great Depression.

Before getting married, she was known on campus as Sally Mae Monteith. Her annual states her major as English and her minor as history. As a student, Campbell was a member of the glee club, college chorus, secretary to the Jackson County Club and a member of the literary society.

Several of her classmates wrote that she “was a lifesaver and good study partner.”

Campbell received both of her bachelor’s and master’s degrees at the college. She then spent 34 years teaching high school students in Sylva.

“I really enjoyed the students,” she said.

Her caretaker, referred to as Reva, said that Campbell’s doctor told her when she turned 100 to continue drinking water, walking and playing bridge every day and she would experience more birthdays.

“For years, I walked at least two hours a day near my house on level territory,” she said. “And sometimes I would walk in the afternoons another two miles.”

Campbell said she walked until she was about 102.

She said she enjoyed the teachers at Western Carolina Teachers College and loved that it “was so close to home.”

She is a native and lifelong resident of Sylva. She and her husband, Claude Campbell, married in 1938 and raised their two children, Judy Covin and Jim Campbell, in Sylva. Claude Campbell owned his own electric store on Main Street in Sylva. The couple was married 47 years before he passed in 1984.