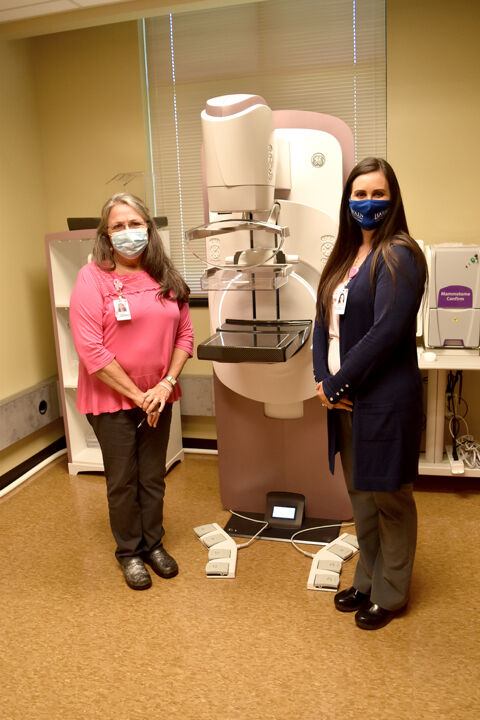 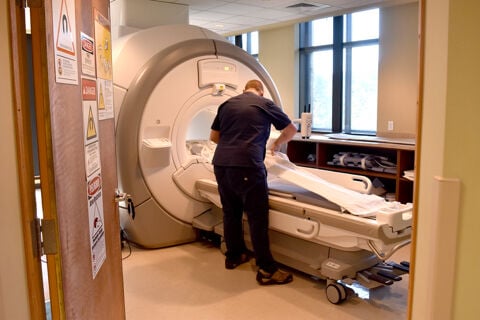 MRI Tech Matt Nicholson prepares to give a breast scan at the Harris Regional Hospital Breast Center. The MRI is part of the center’s state-of-the-art equipment, staff say. 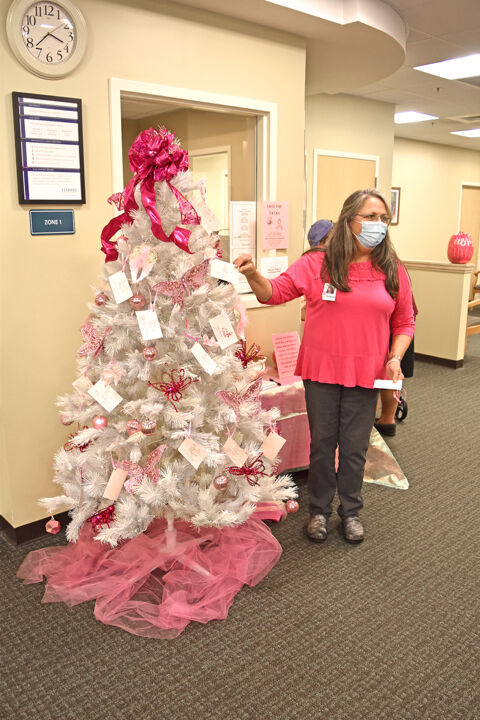 Nurse Navigator Carol Van Cleve and a Christmas tree bearing cards for those affected by breast cancer stand in the lobby of the Harris Regional Hospital Breast Center.

MRI Tech Matt Nicholson prepares to give a breast scan at the Harris Regional Hospital Breast Center. The MRI is part of the center’s state-of-the-art equipment, staff say.

Nurse Navigator Carol Van Cleve and a Christmas tree bearing cards for those affected by breast cancer stand in the lobby of the Harris Regional Hospital Breast Center.

Harris Regional Hospital is taking the fight to breast cancer, adding a new soldier in a modern facility on Doctors Drive just down the hill from the main campus.

She comes to Harris with a passion for fighting breast cancer, and the center is a one-stop shop, she said.

“I’m here to see everything from benign breast disease all the way to invasive breast cancer,” Palumbo said. “We basically have everything available here. You don’t have to travel to other locations or bigger facilities to get the care that you need. We can do it all here.”

“I’m usually the first step in the process,” she said. “When a patient is diagnosed with breast cancer, they come to see me. I place referrals to the other team members who are involved, so medical oncology, radiation oncology, we have both of those onsite here to make treatments really convenient.”

Also in the clinic is Dr. Ryan Marshall, a plastic surgeon.

“We operate together as well, so that opens up an opportunity for immediate reconstruction for our patients if they need a mastectomy,” she said. “In addition, I’m able to offer some more advanced surgical techniques. I’ve been trained on some hidden scar techniques.”

Palumbo works to place surgery scars where they are not very noticeable, she said.

“A traditional general surgeon who may do some breast surgery might make incisions right over where the breast cancer is, sometimes they are not in a very cosmetic area,” she said. “I was trained to place the incisions where they are really difficult to identify. I’ve also been trained in nipple-sparing mastectomies, where we basically preserve all the skin and the nipple so that after surgery, these women look amazing. You can’t even tell that they have had a mastectomy.”

A genetics program is in the works to give women advanced indications they might be likely to develop breast cancer, Palumbo said.

“Any patient who is considered high-risk who would need it, or any breast cancer patient can get testing here in the office,” she said. “Tests can identify gene mutations that might increase a patient’s chance of developing breast cancer up to 90 percent. We are able to provide prophylactic mastectomies if needed, potentially nipple-sparing.”

In addition to breast cancer, the clinic treats women for other issues.

“A lot of the women come in for breast cancer, but for other benign reasons as well, such as breast pain, breast cysts and fiber adenomas, which are little tumors of the breast, or if they feel a lump and they are not sure what it is,” Palumbo said.

“The most common symptom of breast cancer is no symptom at all,” she said. “Often patients come in for their mammogram and they feel totally fine, but they are found to have a tiny mass or microcalcifications and that starts the ball rolling on a biopsy. It really is important for women to get mammograms every single year so that we can catch these really early, because survival is directly linked to the stage at time of diagnosis.”

A new technology in the fight against breast cancer is 3D mammography, which allows for a better picture of the breast than the traditional 2D mammogram.

“This can help pick up some really small cancers that might have been masked by some dense breast tissue,” she said. “The other huge benefit is that it reduces callbacks.”

A callback is when the screening radiologist might see something they can’t definitely identify.

“It might be nothing, it might be something to worry about, so they would have to call the patient back in for a diagnostic mammogram to take some additional views,” she said. “With the 3D mammogram, we get a much better picture of the breast and most of the time they can make a determination if more treatment is necessary. It decreases second trips for the patients which around here is a big deal because a lot of patients travel great distances to come here.”

Palumbo is a member of the American Society of Breast Surgeons and follows their recommendations on who should be screened for breast cancer, she said.

“A woman should start screening mammograms at the age of 40 every single year, even if they are feeling well,” she said. “There are also women who are considered high-risk for developing breast cancer.”

Palumbo meets with women to look at the factors determining high-risk and can make recommendations from there.

Women deemed high-risk should have an annual mammogram and MRI.

The breast MRI is the “Cadillac of breast imaging,” she said. “It’s really going to catch those tiny tumors and give us an excellent picture of the breast,“ she said. “We stagger mammograms and MRIs so that they are seen every six months. This is a way we can identify those cancers really early and have a chance for a complete cure, which is the ultimate goal.”

A questionnaire to assess risk is available at www.myharrisregional.com/our-services/breast-care.

There is currently no waiting list to be seen.

“I’m happy to see people the next day,” Palumbo said. “We try to get them in as quickly as possible. This is a high anxiety time in a woman’s life, especially when she has a diagnosis of cancer.”

Carol Van Cleve works as the nurse navigator for the team.

“I work with the patient from the time they get a mammogram until they have to come back for a diagnostic mammogram,” Van Cleve said. “There might be something wrong or not look right, so they call them back. Most of the time I do that callback and if they need further treatment, such as a biopsy, then I am the one who would educate them on the procedure.”

Van Cleve stays by a patient’s side through chemo, surgery, whatever it takes.

“I navigate them through the whole process so they don’t get lost in the system,” she said.