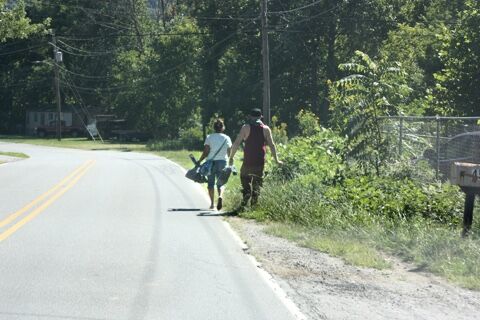 A couple walks the shoulder of Skyland Drive last Thursday. The Jackson County Walks plan to improve pedestrian access in the county was recently OK’d by county commissioners. Changes would come as the NCDOT modernizes roads in the county. 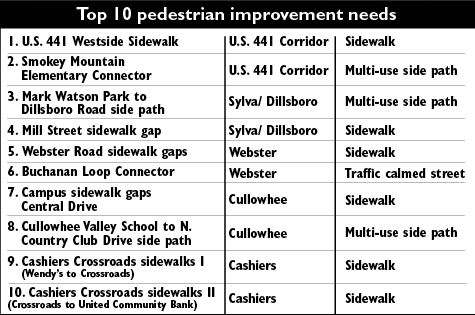 A couple walks the shoulder of Skyland Drive last Thursday. The Jackson County Walks plan to improve pedestrian access in the county was recently OK’d by county commissioners. Changes would come as the NCDOT modernizes roads in the county.

Sidewalks are sometimes hard to come by in the places where they’re most needed in rural areas, especially well populated rural areas.

Jackson County now has a plan to change that.

The Board of Commissioners recently approved Jackson County Walks – a plan that would improve pedestrian access across the county.

The changes won’t come soon because counties do not typically create or maintain roads and require the services of the N.C. Department of Transportation.

“Because (sidewalk) recommendation is found in the pedestrian plan, the new DOT Complete Streets policy states that DOT will bear 100 percent of the cost whereas in previous years the county or municipalities would have a cost share,” Planning Director Mike Poston said. “By having this pedestrian plan, when DOT has a project that they’re going to do they have to evaluate the plan and include the sidewalks. If they’re going to modernize a road, and we have that road shown as needing pedestrian facilities, they will include that into the design.”

The plan is the result of a study conducted by Traffic Planning and Design of Asheville and focus groups from across the county, including elected officials, public health, parks and recreation and local planning committees.

The county received a 70/30 grant from DOT to conduct the study.

The study identified 120 projects, including sidewalks, footpaths and crossings that could improve pedestrian access and created a top 10 priority list.

“There may be some greenway segments that we’ve prioritized in this plan to update our greenway, those are things that the county could get involved with over time that wouldn’t necessarily be in conjunction with a DOT project,” Poston said.

Study results were presented to commissioners by TPD consultant Kristy Carter at the board’s July 13 work session, and commissioners voted unanimously to accept the plan at their Sept. 7 regular meeting.

The goal of the study was to assess where more sidewalks, greenways and crossings could be implemented to reduce pedestrian-involved crashes, create better pedestrian access to schools and colleges and improve county health outcomes by encouraging walking for recreation and other needs.

Sidewalks and greenways make movement easier for those who cannot afford cars to access shopping and work and for those with mobility issues to move around towns and neighborhoods, Carter said.

A 2018 Benchmarking report found that for those with low income jobs, walking is often their only means of transportation to work, she said.

Commissioners Boyce Deitz and Gayle Woody pointed out the issues with Skyland Drive which is frequently used by pedestrians often walking on narrow road shoulders and occasionally in the street as an example of the great need for more sidewalks.

“There’s old people, young people, people carrying babies, pushing carts and everything else walking down that road every day,” Deitz said. “They’re having to walk through there and push bushes back. That’s not a fun walk; that’s not an ‘I’m going to get exercise walk.’ All these people are walking that road every day to go to work, go get groceries. They don’t have a car.”

Skyland is not part of the plan because improvements were already developed by the town of Sylva and DOT and could begin in 2022.

The study also noted that 14 percent of Jackson County residents have a disability.

“Improving pedestrian safety also means that they’re not walking in the middle of the road, and they’re not walking on the shoulder,” Poston said. “They’ve got a facility that’s designed for that movement. It reduces the chances of pedestrian automobile conflict. As you build out this network, people have a dedicated space to walk.”

Jackson County has “quite a number of pedestrian fatalities,” Carter said. “You do have a higher than average number of crashes for a county your size.”

There were 29 pedestrian-involved crashes between 2015 and 2019: eight were in the Western Carolina University and Cullowhee areas, 13 were in Sylva town limits, 12 were at or near an intersection and three resulted in pedestrian deaths.