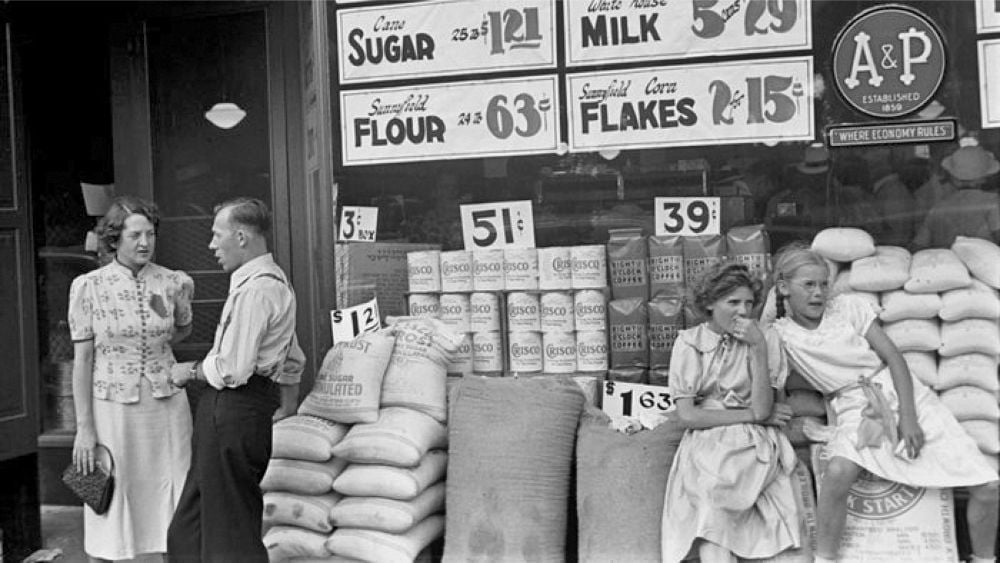 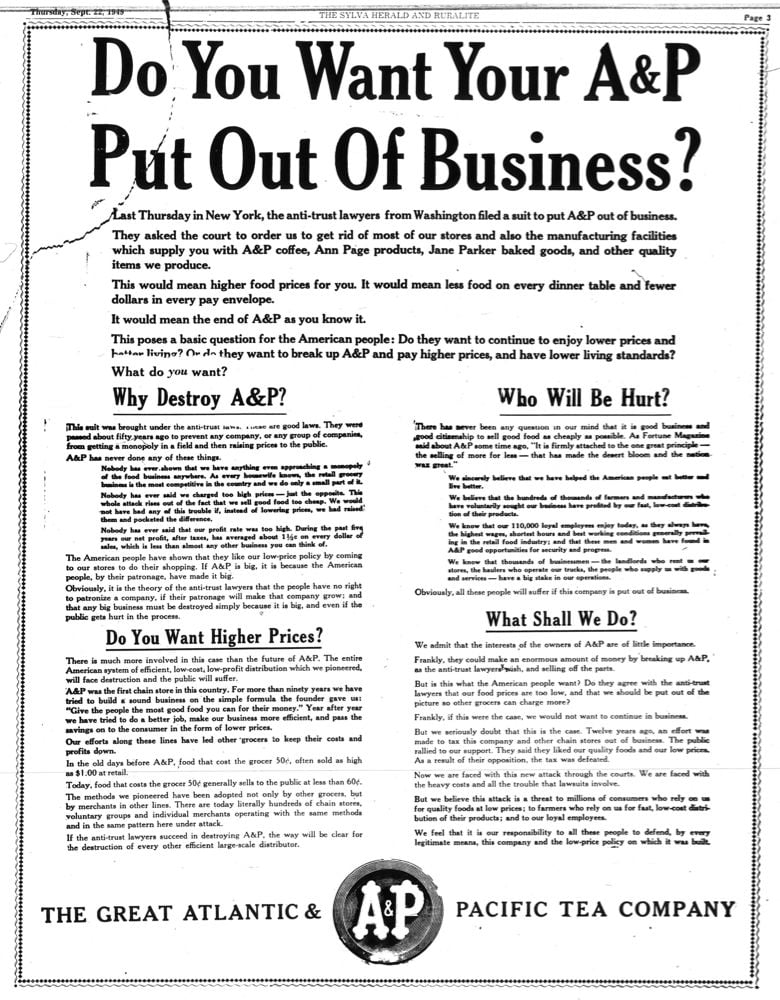 An ad that appeared in the Sept. 22, 1949 Sylva Herald as the company fought an anti-trust suit.

An ad that appeared in the Sept. 22, 1949 Sylva Herald as the company fought an anti-trust suit.

The headline atop a full-page ad in the Sept. 22, 1949 Sylva Herald undoubtedly raised alarm among some local shoppers, as the local A&P was undoubtedly a favorite among a fair amount of folks here.

Let’s back up a bit first and look at how and why the Atlantic & Pacific stores became such a big deal.

In the early 1900s, going to the store was a far different experience than it is today. In many cases it was sort of like going to the pharmacy today; the merchandise was behind a counter, you’d tell the clerk what you wanted, and the clerk would either fetch it off a shelf or have the items delivered to your home.

A&P revolutionized shopping by offering shoppers the opportunity for shoppers to pick and basket items themselves.

The company had a slew of other innovations: stores were standardized and relied on A&P’s own distribution network. Before long A&P was producing its own line of products, from coffee to bread to dairy.

So why was the government taking it to court over anti-trust violations?

Mainly because it had grown so large that local retailers simply couldn’t compete.

Anti-trust rules were essentially crafted to prevent monopolies – a single seller dominating a market to the point it controls prices and has the ability to gouge consumers. In the case of A&P we’re talking about a monopsony, a single buyer with the power to buy in such large bulk that it was able to lower its prices to consumers to the point other firms couldn’t compete. A&P was also accused of favoring its own in-store brands to the detriment of competitors.

In making its case in the Herald (and 2,000 other newspapers across the nation) A&P said:

“This suit was brought under the anti-trust laws. These are good laws, passed about 50 years ago to prevent any company, or any group of companies, from getting a monopoly in a field and then raising prices to the public. A&P has never done any of these things…

“Nobody has ever said that our profit rate was too high. During the past five years our net profit, after taxes, has averaged about 1.5 cents on every dollar of sales, which is less than almost any other business you can think of…”

The ad was surprisingly frank in spots, and foreshadowed a business trend we’ve seen in the acquisition and takeover craze of the last few decades:

“We admit that the interests of the owners of A&P are of little importance. Frankly, they could make an enormous amount of money by breaking up A&P, as the anti-trust lawyers wish, and selling off the parts…”

A&P’s arguments didn’t sway the Supreme Court, which held that the behemoth was able to leverage discounts from suppliers that weren’t available to competing traditional retailers. The playing field simply wasn’t level.

The case wasn’t a knockout blow of any sort to A&P, which continued to rumble along as a dominant player in the grocery market for decades.

But the company that reshaped the industry didn’t keep up as the industry changed anew; George Anderson, editor-in-chief of RetailWire, told Business Insider, “For years the company was criticized for being slow to respond to market conditions, often focusing on extracting dollars from vendors rather than selling to its customers.”

After 70 years of business in this community, local A&P officials announced the store’s closing on Jan. 22, 1998.