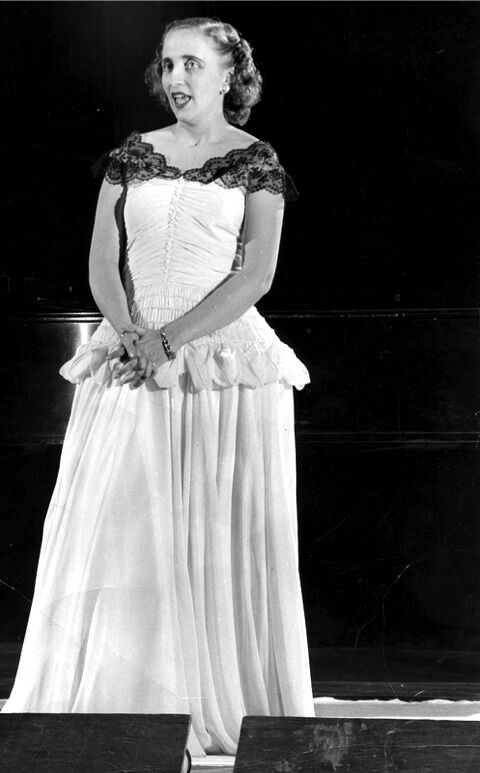 Margaret Truman had a successful singing career before a successful writing career. She sang before 1,100 in Cullowhee. A later negative review of her skills prompted a minor scandal in the Truman administration. 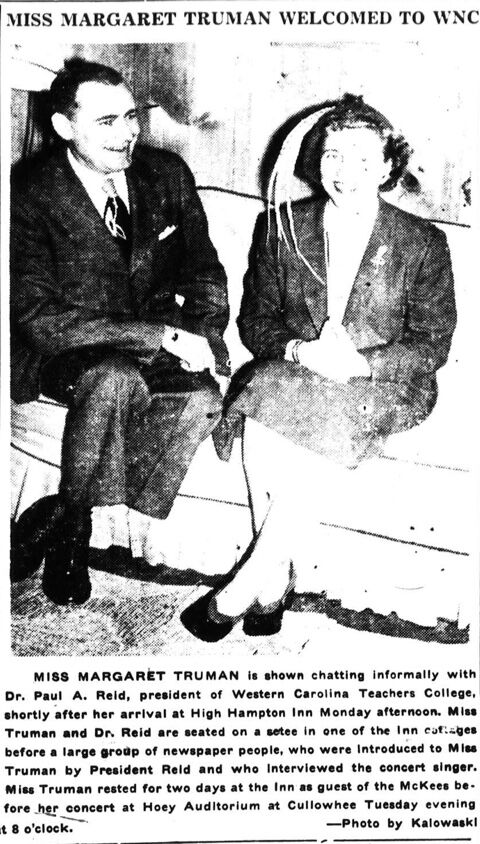 Margaret Truman, daughter of President Harry Truman, is shown with Western Carolina Teachers College President Paul A. Reid at the High Hampton Inn in this 1949 photograph.

Margaret Truman had a successful singing career before a successful writing career. She sang before 1,100 in Cullowhee. A later negative review of her skills prompted a minor scandal in the Truman administration.

Margaret Truman, daughter of President Harry Truman, is shown with Western Carolina Teachers College President Paul A. Reid at the High Hampton Inn in this 1949 photograph.

As September rolled toward October in 1949, Jackson County was abuzz with news of the pending visit of Margaret Truman, daughter of President Harry Truman, for a concert at Western Carolina Teachers College’s Hoey Auditorium.

WCTC was in the midst of an aggressive expansion campaign, and the upcoming arrival of the First Daughter had the school basking in glowing nationwide attention.

Truman was treated like royalty during her three-day visit to the county, being the guest of the McKees at High Hampton Inn before her concert, the first such event she was to hold in the South. Politicians, socialites and college leaders entertained her during her stay.

And evidently she lived up to the hype, at least in Cullowhee. The Sylva Herald said “Whether she is destined to become a great singer is yet to be seen but Miss Margaret Truman, only daughter of President and Mrs. Truman, delighted an audience of over 1,100 people at Western Carolina Teachers College on Tuesday night. The audience was unanimous in their praise.”

The Herald said Truman possessed “a pleasing voice. There is little doubt but that she will become famous as a singer if she continues her career with the same determination with which she has developed thus far. We feel now that she has a far greater chance to develop into a famous singer than we thought her father had of being elected president last fall. Probably some of her father’s stubborn will to fight on in face of great odds is in her make-up and she too will be a big success. Everyone was captivated by her winning personality and pleasing smile. She appeared to be at perfect ease before this, her first Southern concert and audience of the season. Miss Truman’s appearance at Western Carolina has been the means of drawing attention to this institution from many sections, her pictures and articles having been carried in numerous papers concerning her visit to North Carolina and concert at Western Carolina.”

So. Nice voice, a good singer. Not great, perhaps, but certainly not bad.

Truman had launched her singing career after her graduation from George Washington University in 1946. Her first concert was with the Detroit Symphony Orchestra a year later, and she roamed the country performing concerts and recitals. She made a number of television appearances and did recordings with RCA Victor.

Critical reviews of her performances were described as polite or positive, but later on some speculated critics were holding their fire because, well, she was after all the president’s daughter.

Not long after her appearance in Cullowhee that changed, and the reaction it wrought makes us glad nobody took a pot shot at her talents here. In the Washington Post in 1950, music critic Paul Hume opined that she was “extremely attractive on the stage” but “cannot sing very well. She is flat a good deal of the time. And still cannot sing with anything approaching professional finish.”

President Truman did not take that well. Not at all.

Truman was known for being frank, so when he fired off a note to Hume, few would have it expected to read something like “I take exception to your umbrage.”

Then again, few would’ve thought it would be a threat to lay down a roof-to-basement beating.

“Some day I hope to meet you. When that happens you’ll need a new nose, a lot of beefsteak for black eyes, and perhaps a supporter below!”

Hume wanted the letter to be made public, but the Post’s publisher declined. Of course, a smack-down threat from the leader of the Free World couldn’t be kept quiet forever, and eventually leaked out. It was a minor scandal now forgotten.

Critics were afterward free to criticize the younger Truman, but not all critics drew the same conclusion as Hume. Truman went on with her singing career until 1956, when she turned to journalism and writing memoirs and murder mysteries, which she was quite good at. She passed away in 2008.

Truman and Hume did eventually meet, but there were no fisticuffs involved. Instead, Truman was visited by Hume at the Truman Presidential Library, and Hume described it as a wonderful time.

Hume continued on with the Washington Post until 1982, and died in 2001, free of presidential knuckle marks.