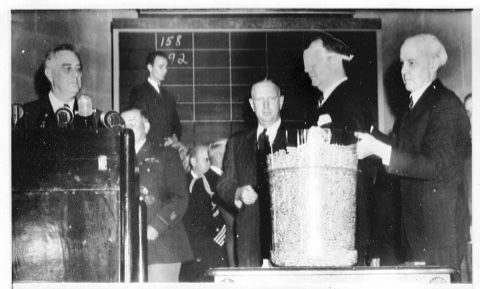 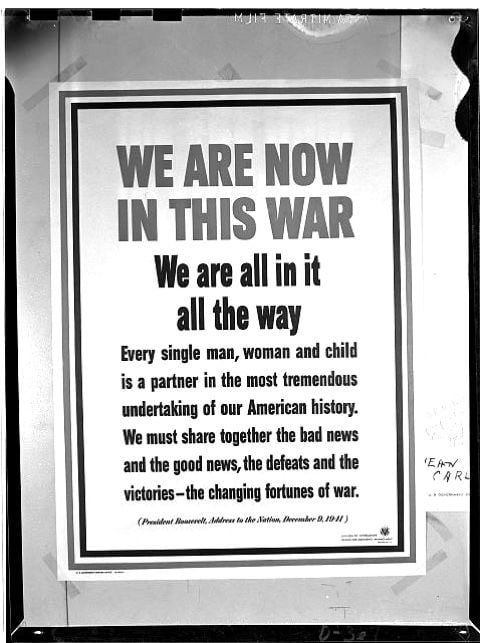 This poster from the Library of Congress Prints and Photographs Division was typical of calls stressing national unity.

This poster from the Library of Congress Prints and Photographs Division was typical of calls stressing national unity.

This, too, shall pass.

In the grips of a pandemic the likes of which the nation hasn’t seen since at least the deadly Spanish flu outbreak of 1918, it’s hard to see the light at the end of the tunnel. But a story from April in 1947 shows that horrible things do come to an end, although the journey may be long.

In this case, it was shuttering of the Jackson County Draft Board, which had been tasked with the necessary but somber duty of steering young mountains boys into the various branches of the armed services.

The decision to institute a draft was taken by congressional committees on Dec. 16, 1940, as Nazi Germany swept across Europe and began trying to breach the defenses of Great Britain. President Franklin D. Roosevelt was given almost unlimited powers to regulate wartime efforts, with the draft being a cornerstone. Initially all men from 18 to 64 were deemed eligible for the draft, a change from the prior standard of ages 21-28. Congressional committees busily worked at unifying standards. The House, for example, started out saying the age for service should be 21, the Senate age 19.

The drawings began to take place, and county men in their thousands answered the call to duty.

Clerk Will Maintain Files Until Taken Over By National Headquarters

After almost six and one-half years of service the Jackson county Draft Board ended its duties here Monday as the National Selective Service Act died without Congress renewing its lease on life. Although records will be maintained by Mrs. Ollie Wilson, board clerk, possibly until June 30, by which time it is expected they will be consolidated in a national records file, Monday was the official closing date of this era in the county’s history. When the board began its duties of supplying men in October 1940 to meet the national emergency that Congress proclaimed, the Nazis had swept through Europe and were beginning the blitz of England, America’s armed forces were just beginning to take shape from its peacetime nucleus of trained men.

The men of Jackson county responded well to their country’s call, and volunteers filled in much of the quotas set for the county until July, 1941 when the first regular induction was made. Thousands of Jackson County youth were processed on the way to active duty before the war ended, and many more were screened and classified. With the end of hostilities the demand for replacements in the Army, Navy, Marines and Air Corps declined, and with this the work of the draft board became less arduous. Successful recruitment programs carried out by the services began filling in the county’s quotas, and allowed President Truman to recommend that the Selective Service Act expire at its appointed time. No detailed information on closing out the office has been received, but Mrs. Wilson is getting all the files and other records in order so that they will be ready for the National office when this change is made. The members of the Jackson Selective Service Board changed from time to time during the life of the act, but the board in service at the end of the act Monday included: O.E. Monteith, chairman, Dillard Robinson, and C.C. Buchanan.

All told, 10 million Americans were inducted into service with the Selective Training and Service Act, including thousands from the fields and coves of Jackson County.

Seventy-eight made the ultimate sacrifice.