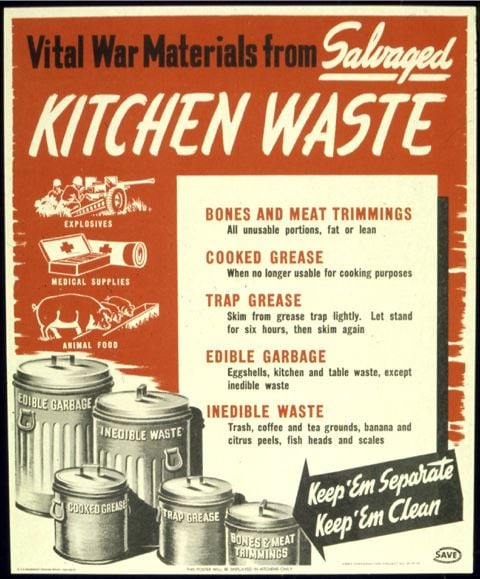 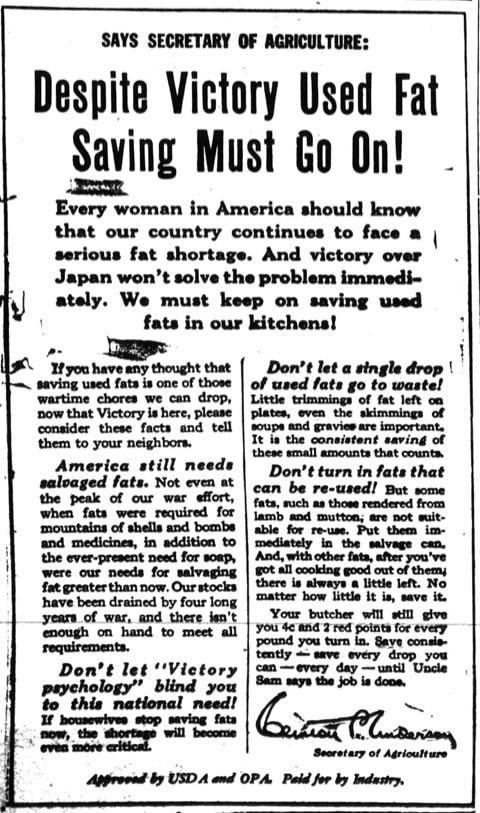 Even after the end of WWII, the government was calling for housewives to donate saved grease from cooking.

Even after the end of WWII, the government was calling for housewives to donate saved grease from cooking.

Despite pleas from the likes of Uncle Sam and Minnie Mouse, it was likely hard to part with bacon drippings

Let’s face it: These days, some us have a little more weight on our frames than we’d like.

That extra weight is generally fat, and most of us would like to get rid of it.

However, during World War II, fat was in high demand. The U.S. government wanted all of it that was available.

Why the government wanted it, and why a great many otherwise patriotic Americans here in the mountains in all likelihood didn’t want to surrender it, is a tale in many ways unique to this region.

Generations of mountain folk grew up primarily on food raised in home gardens, and to supplement a diet of corn and vegetables a hog or two went a long way. Hams and bacon were stretched a long way, particularly bacon. Many have memories of a mountain matron frying up bacon in the morning and carefully saving the grease in a Mason jar or coffee can, grease to be used to season a frying pan, used in cornbread or wilting greens.

It was valuable stuff. Liquid gold.

And the government wanted it. The American Fat Salvage Committee launched an aggressive advertising campaign urging housewives to save every bit of excess fat from cooking and donate it to the war effort, as fats were needed in the production of glycerin, and glycerin was needed to blow things up.

As part of the campaign to round up fat, the government pulled out the big guns: Disney’s Pluto and Minnie Mouse. In a cartoon featuring the duo it was claimed that “Every year 2 billion pounds of waste kitchen fats are thrown away – enough glycerin for 10 billion rapid-fire cannon shells.”

Fat and glycerin were also used in everything from paint to hydraulics to dyes and more, so it was in high demand. About a quarter-million butchers across the country collected used fat for Uncle Sam.

When the war ended in August of 1945, most Americans were ready to let the good times roll, particularly when it came to eating heartily.

But the government was still after fat. Thus, the following ad on page 2 of the Sept. 12, 1945 Sylva Herald was probably greeted with a fair amount of dismay:

Fat Saving Must Go On!

Every woman in America should know that our country continues to face a serious fat shortage. And victory over Japan won’t solve the problem immediately. We must keep on saving used fats in our kitchens! If you have any thought that saving used fats is one of those wartime chores we can drop, now that Victory is here, please consider these facts and tell them to your neighbors. America still needs salvaged fat. Not even at the peak of our war effort, when fats were required for mountains of shells and bombs and medicines, in addition to the ever-present need for soap, were our needs for salvaging fat greater than now. Our stocks have been drained by four long years of war, and there isn’t enough on hand to meet all requirements. Don’t let “Victory psychology” blind you to this national need! If housewives stop saving fats now, the shortage will become even more critical.

Don’t let a single drop of used fat go to waste! Little trimmings of fat left on plates, even the skimmings of soups and gravies, are important. It is the consistent saving of these small amounts that counts. Don’t turn in fats that can’t be reused. But some fats, such as those rendered from Iamb and mutton, are not suitable for re-use. Put them immediately in the salvage can. And, with other fats, after you’ve got all cooking good out of them there is always a little left. No matter how little it is, save it...

Save every drop, every day, until Uncle Sam says the job is done.

However, the war offered housewives something of a Catch-22 situation. Fat was needed on the war front; but because of the war, butter and lard were rationed and most of the supply of cooking oils was cut off by the Japanese sweep across the Pacific.

So, despite everybody pitching in to aid the war effort, the fat push may have been something of a dud. One study showed that at the start of the fat push three-quarters of households were already saving their bacon grease for re-use, and that the popularity of re-using grease at home was highest in the South. It’s a safe guess it might have been higher still in the mountains.

And it’s a safe guess that mountain women, especially after the war and despite the government’s admonition, went right on using that bacon grease as they always had.