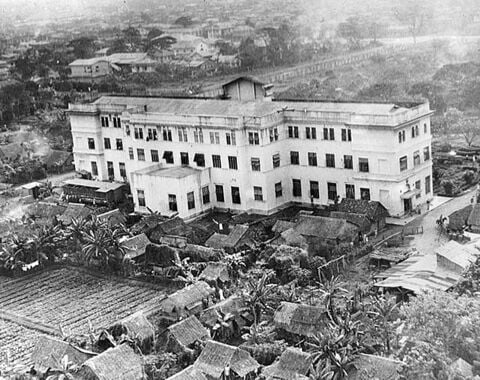 An aerial photograph of the Old Hospital (Engineering building) of Santo Tomas University in Manila in 1945. Surrounding the building are the shanties built by allied prisoners of war/internees in the Japanese Santo Tomas Internment Center. 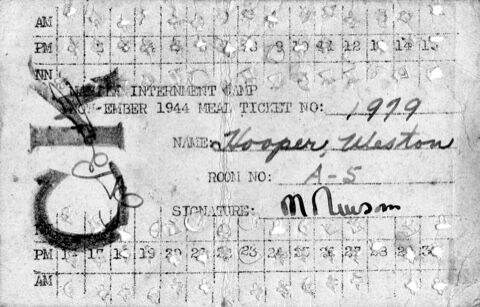 Western Carolina’s Hunter Library has a rich trove of writings and memorabilia from W. Carr and Elizabeth Hooper’s years in a Japanese internment camp.

An aerial photograph of the Old Hospital (Engineering building) of Santo Tomas University in Manila in 1945. Surrounding the building are the shanties built by allied prisoners of war/internees in the Japanese Santo Tomas Internment Center.

Western Carolina’s Hunter Library has a rich trove of writings and memorabilia from W. Carr and Elizabeth Hooper’s years in a Japanese internment camp.

January of 1944 dawned with news in the Sylva Herald of the imprisonment in the Philippines of W. Carr Hooper and his wife.

The Jan. 5, 1944 report, “Former Teacher of Sylva is Jap Prisoner” contained some original correspondence from Hooper and other news from New Yorker Alvin Aurell, freshly arrived stateside after returning from the same prison camp where the Hoopers were held, Santo Tomas in the Philippines.

The Herald reported, “Mr. Hooper was formerly superintendent of the Sylva graded school, and about 12 years ago, he and Mrs. Hooper, the former Miss Ruth Williams of Fayetteville, Tenn., went to the Philippines, where Mr. Hooper was employed by the government to teach English. About six years ago he became associated with the Singer Sewing Machine Company as paymaster and held that position when Manila fell about two years ago.”

Hooper’s correspondence contained the following: “We have been allowed to communicate to you that both of us are well and are as comfortably quartered as possible under the circumstances,” Hooper wrote. “We read, work on assignments, carve, do gardening, knit and engage with various activities. We have medical and hospital facilities. Kindly relay our message to Ruth’s sister and tell her that when possible Ruth will need shoes, dresses, etc.”

Aurell reported that “Mrs. Hooper has been working in the hospital most of the time and by virtue of that fact has been entitled to the hospital diet, which is superior and has benefited her. She still suffers from attacks of migraine headache … aside from this ailment, she looks and is quite well.”

And to Carr Hooper’s parents, he noted “Your son is not quite as heavy as he was, but is still well covered and keeps active doing various Camp jobs, such as working in the kitchen, hauling garbage, digging ditches, cleaning out the dining shed, etc. … you will also be interested to know that your son built a small bamboo shack in the college grounds soon after he was interred. It measures about 8 feet by 10 feet and gives them a place in which to spend their days. It is located in a small plot measuring approximately 20 feet by 20 feet and he has spent many hours beautifying the small garden with flowers and various tropical plants …”

So there was at least confirmation that the Hoopers were alive. But life in Santo Tomas was harsh.

A doctor reported that the average weight loss among male internees at the camp was about 53 pounds over three years of internment. During the span of the camp’s existence, nearly 400 deaths of internees were reported, about triple the civilian death rate in the U.S. over the same period. Those 60 and older bore the brunt of it the worst; comprising about 18 percent of the camp population, they represented nearly two-thirds of the deaths.

The Hoopers left behind a rich trove of writings and memorabilia of their experience, which can be accessed at Western Carolina’s Hunter Library’s Digital Collections.

After liberation the couple returned to the U.S. and Carr Hooper returned to teaching. He accepted the position of principal at Sylva High in 1956 and the newly-consolidated Sylva-Webster High School in 1960, retiring in 1969.

Carr Hooper died in 1981, and Ruth Williams Hooper in 1984. The stadium at Sylva-Webster, now Smoky Mountain High, is named in Carr Hooper’s honor.