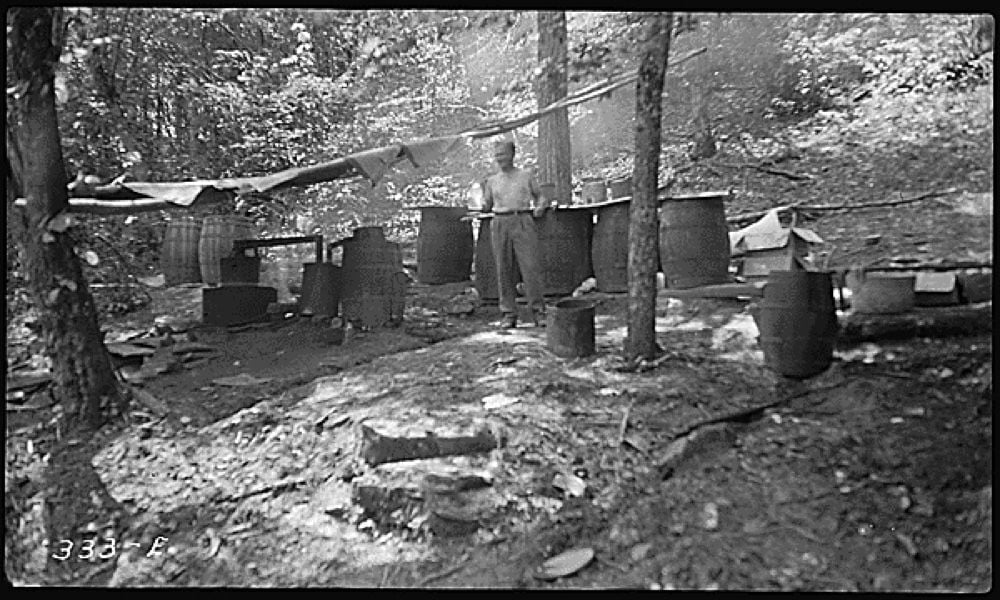 Moonshine still in Knox County, Tennessee, in 1936. Stills and moonshine trafficking in general were wiped out in Jackson County in a late 1948 campaign at the hands of Sheriff Griffin Middleton. 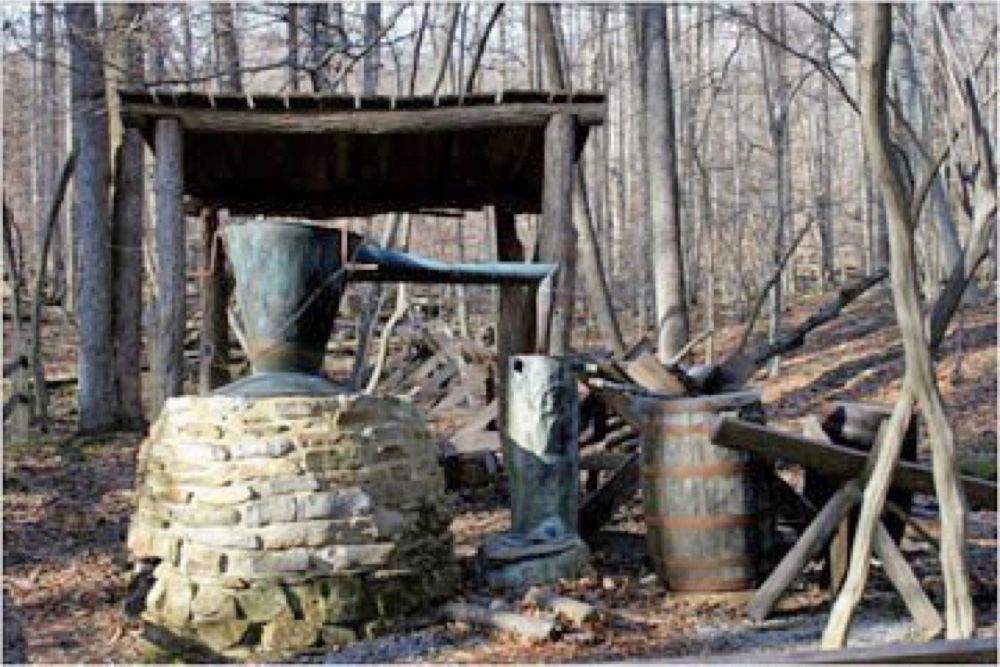 Small, family-operated stills similar to the one currently on display at the end of the Blue Blazes Whiskey Still trail in Maryland were once across much of the South, including here in Jackson County.

Moonshine still in Knox County, Tennessee, in 1936. Stills and moonshine trafficking in general were wiped out in Jackson County in a late 1948 campaign at the hands of Sheriff Griffin Middleton.

Small, family-operated stills similar to the one currently on display at the end of the Blue Blazes Whiskey Still trail in Maryland were once across much of the South, including here in Jackson County.

As the fall of 1948 turned to winter, Jackson County Sheriff Griffin Middleton was on a tear.

Middleton and other law enforcement officials racked up 40 moonshine captures in five months. The series of raids seemed to have effectively dried up liquor trafficking in the area.

Middleton’s feats were widely lauded, but also may have played a part in a local tragedy, the deaths of three men experimenting with wood alcohol.

The raids and the deaths dominated the front page of the Sylva Herald as 1949 dawned. On Jan. 13 there were four separate stories related to these events.

The top story told the tale of the deaths. “Three young white men are dead and several others are recovering from poison effects after drinking wood alcohol which they mixed with water last Wednesday night in a drinking party of a group of painters, all of the Sylva area.”

A 30-year-old died in bed Thursday morning after drinking with the group Wednesday night. The second victim died about 6 p.m. Thursday. A 20-year-old was taken to the hospital Thursday afternoon and was released after being deemed out of danger. As he walked home, he talked with friends on the street on the way, stating “I’ll never drink another drop.” He died at his home around 10:30 the following morning.

The Herald reported the three were part of a group of 12 to 15 men who engaged in a drinking party.

“Sheriff Griffin Middleton investigated and found a gallon container half full of wood alcohol which members of the party said had been full, the other half being mixed with water and drunk by the men. The varnish and paint thinner had been secured from a local building supply firm Wednesday.

“Each of the poisoned victims died in great agony, surviving members of the party stated. A number of others were deathly ill for some time.”

Two other stories dealt with the raids.

One was headlined “Sheriff Takes 3 More Stills In Drive On Liquor.”

“Sheriff Middleton and Deputy Frank Allen have taken three more ‘moonshine’ stills in the last week, which are in addition to the 40 captures in the past five months.

“These liquor making stills were taken in the Balsam and Cullowhee sections. On Tuesday of last week the officers captured a 40-gallon outfit and destroyed 400 gallons of mash near Balsam and another almost the same size on Dark Ridge. A 30-gallon still and 160 gallons of mash were destroyed on Cullowhee Mountain the same day. In commenting on the large number of stills captured in the last few months, the Sheriff stated that this may have something to do with the Sylva men resorting to a quick plan of making whiskey from wood alcohol, as their usual source of supply had possibly been cut off in this way. However, this was no excuse for men resorting to such a dangerous practice, he said, the result being fatal for three already.”

“Moonshining in Jackson County is not the safest and surest way to make a living these days. The 40 copper outfits captured by Sheriff Middleton and his deputies during five months of 1948 prove this statement. They poured out 4,000 gallons of sweet mash, which was enough to manufacture about 400 gallons of ‘mule.’ Had this mash been made into whiskey and legally sold the federal government would have netted something like $3,600 in liquor tax money. When you see Sheriff Middleton and his deputies with their khakis on, riding away in their jeep, you can rest assured that someone has reported the whereabouts of a liquor-making contraption. If you think searching for them and rawhiding them over miles of rugged hills is an easy job, then you should accompany the officers of Jackson County on one of their unpleasant searches.

“In the past few weeks Sheriff Middleton has captured a total of six stills, nearly every one of them within four or five miles of Sylva.”

The story noted that Middleton took advantage of his raids to help local students.

“Students in various Jackson County schools are benefiting from the sheriff’s adventures. He has presented most of the copper to vocational departments for the purpose of experimenting in making trays, bowls, baskets, etc.”

Finally, a fourth story told the tale of the spillover effect the deaths and raids had on neighboring Haywood County. A story picked up from The Mountaineer of Waynesville was headlined “Poison Liquor In Sylva Has Sobering Effect On Waynesville.”

“Chief Orville Noland does not believe that any of the 15 people who drank poison liquor in Sylva last week were from this area. Three men are dead, and three others desperately ill, it was reported from Jackson County Monday noon. One other man is reported missing, but officers here said that had not been confirmed.

“Chief Noland said that one of the men now reported desperately ill was a frequent weekend visitor to Waynesville and had at times given considerable trouble by getting drunk. This man was reported to have been in Waynesville Saturday night, and ‘looked like his eyes were set in death’ one person said. The police did not know of his visit, as he behaved himself and went back home to begin “doctoring up.” It is understood from officers that the man is frightened over the death of three other men, and is now eating huge quantities of raw dough, and washing it down with melted lard and olive oil in an effort to kill the effect of the poison. Officers said that a gallon of paint thinner was used as a base for making two gallons of white liquor. The thinner was wood alcohol. Among the many reports coming from Sylva was one picked up by a passing officer, who said: ‘It is impossible to sell white liquor in Jackson County for five cents a pint since all this happened.’ Chief Noland further commented by saying: ‘Things have been mighty quiet around here. We have had fewer drunks during the past week than in a long, long time.”’

Noland was asked to what he attributed the quiet. He responded, “I don’t know whether they are broke, or scared, but it has certainly been a quiet period for the police.”