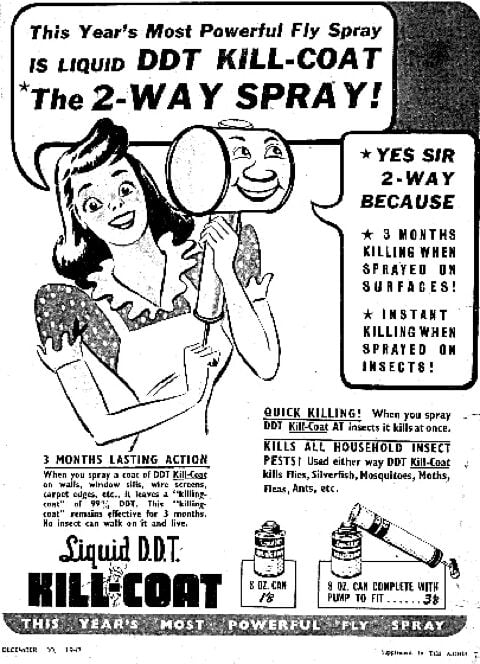 Back in 2018 this page featured an article on the wild popularity of DDT, an insecticide that had proven its effectiveness in, among other places, the jungles of the Pacific during World War II. There it was largely used against malaria-bearing mosquitoes.

It was so effective that it was promoted for use in civilian life against, well, pretty much everything. Town leaders in Sylva in 1948 called for a “fog spray of DDT to all premises inside the city limits and as much of the outlying district as funds will provide for.”

Every property and business owner in town was asked to pony up $1 each to cover the expense of the spraying, with the goal of preventing the spread of polio. (It was hypothesized that polio was spread by flies, a theory that was later debunked).

However, DDT was in fact great at killing flies, and flies can cause all sorts of mischief. In July of 1947, instead of spraying DDT all over town, the goal was to spray DDT all over dairy farms to kill bugs, reduce bacteria sickening milk cows and thus improve production.

DDT was popular for a variety of reasons. It was relatively cheap, very long-lasting and, to quote one Nebraska farmer, “everybody liked DDT because they really got a kill.”

Additionally, it was thought to be safe. In fact, some proponents said it was safe enough to eat.

And so, the N.C. state laboratory of hygiene began furnishing DDT to Jackson dairies that produced Grade A milk. The July 10, 1947 Herald reported “The DDT, which is prepared in an emulsion of oil, is being distributed through the county health departments of the state and must be applied under health department supervision. Charlie Thomas, sanitation officer, is supervising its use in Jackson and Swain counties. … At the first of this week four dairies were sprayed with the solution and Mr. Thomas was rapidly giving the remaining dairymen the chance to use the DDT on their dairy farms. All of them are eager to use the DDT because of the improvement in quality of milk which its use brings… The emulsion of DDT in oil is mixed with water, four parts of water to one of the emulsion, and sprayed on the walls of dairy barns and then on other places where flies and insects are likely to frequent. … The oil in the solution sinks into the wood and disappears, leaving the crystals of DDT on the outside where flies and insects contact it when they light on the wood. The crystals remain on the wood and are effective in killing insects for more than one year.”

The use of DDT at dairies tailed off in the 1950s, as did its use around the general public. The reasons its popularity flagged were the same reasons it was popular in the first place: It killed effectively, and it lasted a long time. Persisting in the environment, it would build up and have adverse health effects on anything in food chains. Except, ironically, in quite a range of flies, which developed resistance.

Vintage ads showed how DDT was widely promoted as a safe and effective insecticide.