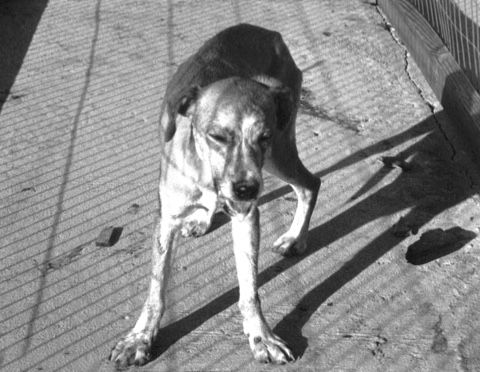 A rabid dog exhibits a primary indication of the presence of rabies, saliva dripping from the mouth. Before 1960 the majority of rabies cases were in domestic animals, but in recent years about 90 percent of cases have been reported in wildlife. 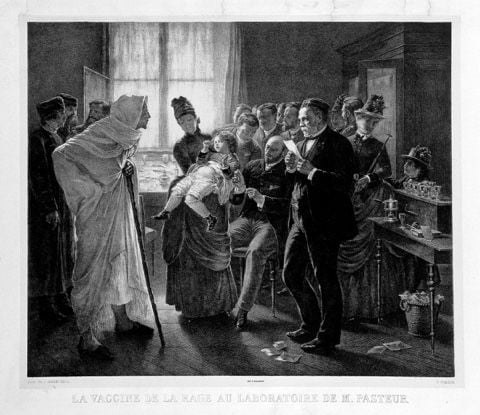 Virtually all infections with rabies resulted in death until Louis Pasteur and Émile Roux developed the first rabies vaccination in 1885. A 9-year-old who had been mauled by a rabid dog received the first vaccine.

A rabid dog exhibits a primary indication of the presence of rabies, saliva dripping from the mouth. Before 1960 the majority of rabies cases were in domestic animals, but in recent years about 90 percent of cases have been reported in wildlife.

Virtually all infections with rabies resulted in death until Louis Pasteur and Émile Roux developed the first rabies vaccination in 1885. A 9-year-old who had been mauled by a rabid dog received the first vaccine.

As the 1950s dawned in Jackson County, an old terror was stalking the land anew: rabies was on the loose.

While treatment for rabies was available, many people in 1950 likely recalled the days in the early part of the century when about 100 people died annually in the United States from the disease. The older set likely had heard stories of the days prior to 1885 and the invention of the rabies vaccine by Louis Pasteur and Émile Roux, when rabies was virtually a death sentence.

The outbreak in Jackson occurred in Tuckasegee, and followed a serious outbreak in Asheville. Local authorities reacted quickly and firmly.

All Tuckasegee Dogs Placed Under Strict

An outbreak of rabies threatened Jackson County this week as the result of the discovery of a “mad-dog” at Tuckasegee. A positive report from the State laboratory at Raleigh on Tuesday concerned the dog owned by C.B. Houston. The dog had run loose and bitten several others in Tuckasegee that authorities were able to trace and confine for observation. It is feared that other animals in the area may also be infected. C.B. Thomas, District Sanitarian, was hopeful that the disease would not reach such proportions as was the case in Asheville recently when 85 persons were required to take the painful and expensive rabies treatment following contact with infected dogs. Thomas said that the Sheriff and Highway Patrolmen have been advised to destroy any dog found not bearing the tags showing evidence of rabies inoculation. At the same time Thomas asked that any dog which shows suspicious signs should not be killed immediately, but confined and the health authorities notified since confinement and observation are the only sure ways of diagnosing rabies. It was also pointed out that any dog which has not been inoculated for rabies should be given the shots at once. The Farm Agent’s Office can give full particulars.

The Herald followed up with an editorial expressing the seriousness of the affair.

A Threat Of Rabies

A definite threat of rabies lurks in Jackson County and is fully explained on the front page of The Herald this week. As is pointed out in the story, a “suspicious” dog has been reported in the Tuckasegee region and has been destroyed, but not before he had bitten several other animals. Authorities have taken precautions in that section, and the situation can be regarded as under control. It remains a fact, however, that a rabies epidemic could easily sweep the county if proper precautions are not taken at once. In the first place, there is a state law requiring the inoculation of all dogs against the disease. It is the duty of law enforcement officers to kill any animal found without the proper tags which evidence such treatment. Unfortunately, such precautions are seldom carried out fully. Only when the disease strikes in brutal force are stray dogs usually taken up and destroyed. In Asheville such measures are being taken, but only after 83 persons have undergone painful treatment against rabies. Jackson County citizens should immediately confine their dogs and have them inoculated if such has not been previously done. Arrangements can be made for the inoculation by calling the County Agent’s Office. The consequences of not following these rules need not be elaborated. Once bitten by a “mad-dog”, the treatment is long, painful and expensive. Death from the disease is a drawn-out, horrible thing. It behooves every citizen to act at once!

The response apparently worked, as news of rabies vanished from the Herald in coming weeks.

Around the country and world, rabies remains a problem. About 5,000 animal rabies cases are reported annually to the Centers for Disease Control. Deaths in the U.S. are down to one or two a year; from 1960 to 2018, 125 human cases were reported in the U.S.

Worldwide, however, rabies remains a serious threat. About 60,000 people are claimed by rabies every year, mainly in Asia and Africa.