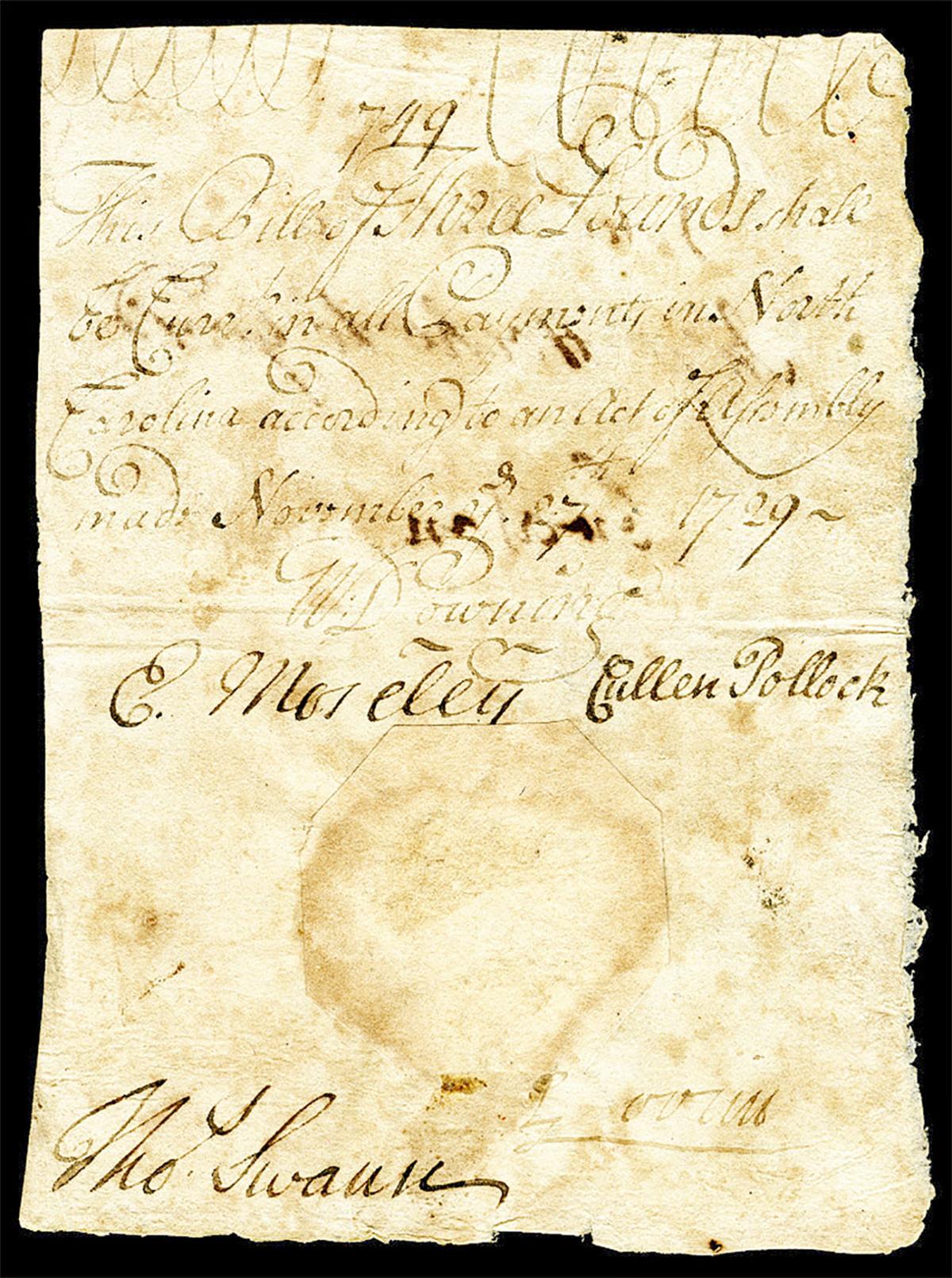 Colonial currency from the Province of

Colonial currency from the Province of

Nancy Wilson shared the following brief item from the April 6, 1927, Jackson County Journal that opened the door to a fascinating issue – money in the early years of what would become Jackson County.

FIND SKELETON AND MONEY UNDER

“Workmen excavating for a furnace room under Jarrett Springs Hotel in Dillsboro yesterday afternoon dug into a grave and found a skeleton, presumed to be that of an Indian, together with 10 pieces of Spanish silver money ranging from 1796 to 1804.

“It is deduced that the grave was made more than 100 years ago, while the Cherokees were still in possession of the territory around Sylva.”

Spanish coinage was definitely something to hang on to in the early days of North Carolina. It was pretty much the only game in town.

The Federal Reserve Bank of Philadelphia says “…some Spanish, Portuguese and French coins appeared in the colonies as a result of trade with the West Indies. The most famous of these was the Spanish dollar, which served as the unofficial national currency of the colonies for much of the 17th and 18th centuries. With its distinctive design and consistent silver content, the Spanish dollar was the most trustworthy coin the colonists knew. To make change the dollar was actually cut into eight pieces or ‘bits.’ Thus came the terms ‘pieces of eight’ from these early times and ‘two bits’ from our time.”

Since North Carolina was a British colony, why wasn’t British coinage established as the go-to money?

Well, because of Britain, which imposed monetary restrictions on the colonies. With a shortage of shillings and pounds, colonists were forced to barter in goods and to turn to foreign coins. The North Carolina Collection at the University of North Carolina notes that the concept of paper money to solve the problem was arrived at as a solution in North Carolina. Problem was, no printer resided in North Carolina. Thus, to pay for war against the Tuscarora Indians, in 1712 and 1713 North Carolina approved the issuance of 12,000 pounds in bills of credit. Subsequent issues were authorized in later years, with the grand total of 76,000 pounds comprised of nearly 60,000 bills being issued by 1729.

All were penned entirely by hand. Handwritten currency drew counterfeiters like sharks to blood in the water. Royal Governor Charles Eden complained rampant counterfeiting was hurting the economy, and his successor, Governor Gabriel Johnston, complained about the funny money being passed into circulation by “Vagabond and Idle people.” In 1734 North Carolina called it quits when it came to handwritten money.

Meanwhile, Spain was cranking out uniform coins by the millions, to the point where the Spanish dollar became the first international currency. The first U.S. dollar was based on the Spanish design, and the Spanish dollar continued to be widely used across North America. It was legal tender in the U.S. until the passage of the Coinage Act in 1857.

And it was valued all along the way – valued enough to be included in one person’s journey to the final reward in a lost grave in Dillsboro.