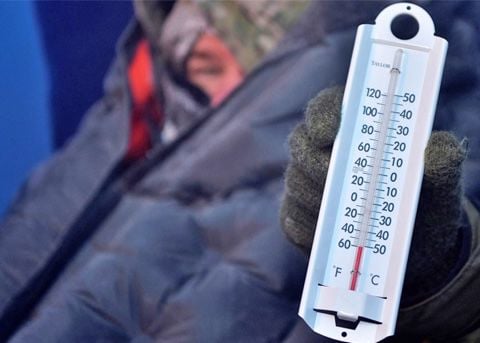 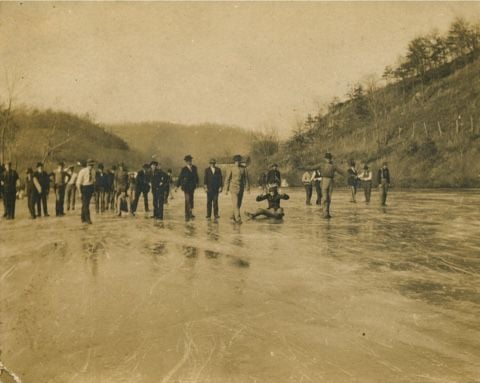 While Sylva hasn’t experienced sub-zero temperatures this year, they were once fairly common to the area. In this undated photo, a crowd enjoys some ice-skating fun on Scotts Creek.

While Sylva hasn’t experienced sub-zero temperatures this year, they were once fairly common to the area. In this undated photo, a crowd enjoys some ice-skating fun on Scotts Creek.

The late Johnny Carson had a running bit on his “Tonight Show” openings where he would throw out the line “it was so cold…” to which his audience would reply, “how cold was it?”

“It was so cold, the politicians had their hands in their own pockets.”

Johnny is no longer with us, but the question of “how cold was it?” could be found on the minds of most folks in Jackson County 80 years ago this week as one of the most bitter winters in memory continued to drag out.

The answer was “very.”

The Jackson County Journal reported on Feb. 1, 1940, that “Climaxing five weeks of real winter weather, last Friday morning was the coldest that has been seen in this part of Jackson County since 1893. Altogether this was the coldest spell of weather during the present century in most of Western North Carolina and the South. Unofficial readings in and around Sylva gave the temperature on Friday morning at 14 below zero, while the official United States thermometer at Cullowhee registered minus 18. Not since the famous, but now almost forgotten all-time low since there have been thermometers in this region, of Feb. 16, 1893, have Sylva and Cullowhee seen it so cold. On that February day 47 years ago there were two thermometers in the village of Sylva. One of them recorded 31 below and the other 29 below. The United States thermometer at the home of Judge Davies hit a low of minus 25, and at Webster it was minus 30. Most people hereabouts had forgotten that the mercury could drop down into the teens below zero, and even into the 20s and 30s, until they awoke last Friday morning to find their thermometers well down into the minus teens. Some instruments that record no lower than 10 or 12 below had given up the struggle of trying to record the cold, and the mercury had contracted all of itself into the little bulb at the bottom.

“While Jackson County was shivering, all the rest of the mountain country was cold. Topton had a recording of -17; Brevard -18; and Enka, -14. But at some of the higher altitudes the cold was not so severe. The weather station atop Mt. Mitchell recorded -8, which isn’t unusual up there. The whole South shivered in the cold, and zero minus was not unusual in many places in Tennessee, Georgia, South Carolina and even Mississippi. Icicles a foot long formed at Florida’s famous winter resort of Miami, and damage to the citrus crops and vegetables in Florida and Louisiana ran up into the millions.”

Needless to say, the deep cold wreaked havoc with pipes around the county, and led to the loss of the home of Mr. and Mrs. Sam Roane of Sylvan Heights. The two, who were home, sounded the alarm after a fire started in their chimney flue. Sylva firefighters responded promptly, but the deep cold had frozen the water in the fireplug servicing the home. They built a fire to thaw out the hydrant, but the flames in the frame home spread quickly and the Roanes were able to save only a few belongings before the house was engulfed in flames.

Some of the record lows reported by the Journal match up against official records, and some don’t. The records reported from 1893 – 25 below to 31 below – aren’t in the record books, but again it’s worth noting there were only two thermometers in all of Sylva at the time.

The state Climate Office, using records from the Cullowhee station, has the all-time low in Jackson at -19, also on Jan. 21, 1985.

How cold was it?