The Sylva Supply Company, shown here in the 1960s, operated from 1898 to 1999. During the Great Depression the business specialized in bartering with locals. 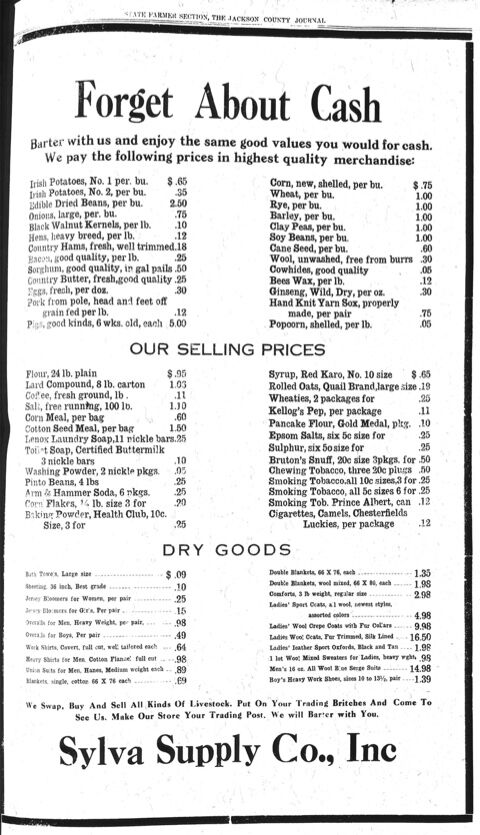 The Sylva Supply Company, shown here in the 1960s, operated from 1898 to 1999. During the Great Depression the business specialized in bartering with locals.

There was an old saying once popular to describe mountain people: “Land rich, dirt poor.”

It was once common for folks in Jackson County to live on a few acres of land, or a few dozen, or even a couple of hundred. It was land that had been handed down from ancestors, often parceled up among sons and daughters along the way.

A patch was commonly used for a home garden, and some might be used for market crops to raise a little money. Many people had a couple of steers and/or a milk cow, chickens for eggs and food, etc. Nobody was getting rich, but nobody was starving.

It was a lifestyle that came in handy when the Great Depression rolled across the nation. Instead of money, much of the country turned to bartering.

Many Jackson County folks didn’t have money to begin with and were already old hands at bartering.

Bartering dates back to Mesopotamian tribes and was picked up by the seafaring Phoenicians, meaning goods from far-flung areas could be bartered. Spices were popular bartering fare, as was salt. Prior to today’s commercial salt processing techniques, salt was highly prized; today’s world “salary” can be traced to the practice of paying Roman soldiers either in salt itself or in enough coin to purchase needed amounts.

Along the way crops, animal skins, weapons, even human skulls were used as bartering items.

When the Depression hit and the pace of bartering picked up here, one firm stood out as a champion barterer: Sylva Supply.

Sylva Supply was solidly rooted in the community long before the 1930s, having been established in 1898. Its business model was “dealers in everything.”

Sylva Supply frequently ran large advertisements in the Jackson County Journal telling people to come in and barter. And barter they did.

We’ve never seen a list of items Sylva Supply wouldn’t take, but it’s a safe bet that list would be far shorter than what they were eager to trade finished good for – country staples people had an excess of. Popular barter items were eggs, chickens, hand-knitted wool socks, dried apples, beeswax, country hams, country butter, popcorn and soybeans.

One ad proclaimed “Forget About Cash … Barter with us and enjoy the same good value you would for cash … We swap, buy and sell all kinds of livestock. Put on your trading britches and come see us. Make our store your trading post.”