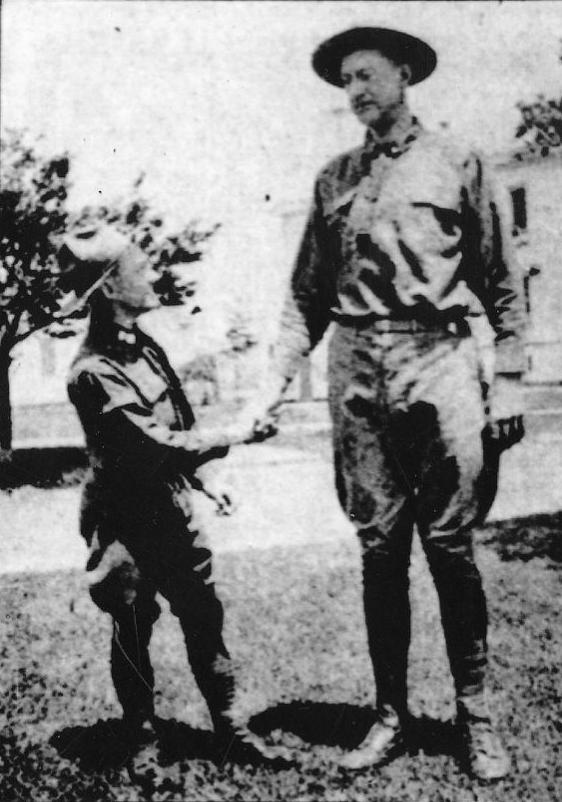 The late Chunk Cowan, thought to be the tallest soldier in World War I, and Edward Allen, believed to be the shortest. 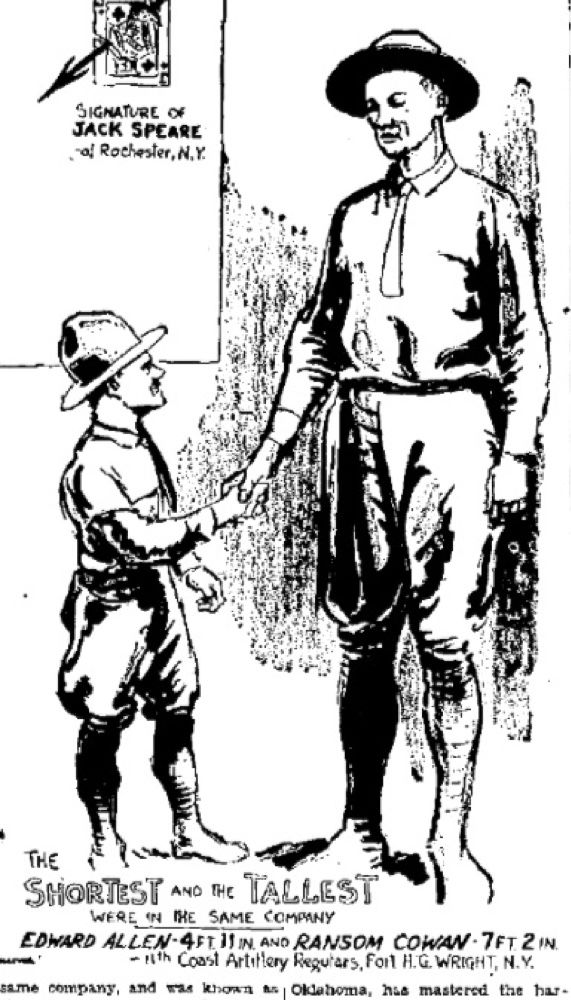 This Ripley’s feature, which ran in newspapers across the country, is clearly based on the photo of Cowan and Allen.

The late Chunk Cowan, thought to be the tallest soldier in World War I, and Edward Allen, believed to be the shortest.

This Ripley’s feature, which ran in newspapers across the country, is clearly based on the photo of Cowan and Allen.

Local lore has it that one of our own, Ransom “Chunk” Cowan of Sylva’s Savannah community, was the tallest soldier in World War I. Based on a quick trip to the internet, it seems that may or may not be true.

The Herald’s recent history feature about local WWI soldiers reminded me of research on Cowan that Jacqueline Painter shared with me a couple of months ago. Painter was collecting the information for a possible magazine article but decided she might not get to it and turned her file over to me.

It includes the poor-quality accompanying photo, which Painter said her sister found online. During my search for the source of the photo, I came across another picture of the same two soldiers that appeared in the Bridgeport (Connecticut) Telegram on Nov. 3, 1925. Headlined “Shortest Soldier is Local Man,” the caption reads: “Sergeant Ransom Cowan of the U.S. Heavy Artillery is the tallest soldier in the army, and probably in any military force in the world. He stands 7 ft. 2 in. Sergeant E.T. Allen, formerly of Bridgeport Recruiting service, claims to be the shortest man in Uncle Sam’s forces, and measures but 4 ft. 11 in. One wears a 14 shoe, the other a small 4. The two sergeants are buddies.”

Before I found the 1924 photo of Cowan and Allen, I saw one of Homer Parks, captioned: “Homer Parks (born Homer Hill Parks) was billed at 7 feet 3 inches and the tallest soldier in World War I, but according to close family his peak height was 7 feet 0 inches.”

Information under the Telegram’s photo of Cowan and Allen does indicate that Cowan saw service during the war: “It is said of Sergt. Cowan that he had the greatest difficulty in keeping his head below the parapet of the trenches in France during the Great War and had to have a special hole dug for him in which to stand when on sn(i)ping duty in the American ‘front lines.’”

The caption with the undated photo printed here, which was published in the Honolulu (Hawaii) Star-Bulletin, reads: “Edward T. Allen, 4 feet 11 inches, and Ransom Cowan, 7 feet 2 inches, the smallest and largest soldiers in the United States Army, who served in the same company and played in the same band.”

The accompanying story, headlined “Tallest Man in Army once had duty in Hawaii,” with a subhead reading “Fort Kam Sergeant’s Photo Proves One of Ripley’s Believe-It-Or-Nots,” makes no mention of World War I, saying only that the photo was taken in 1924.

Apparently the Star-Bulletin published a daily Ripley’s feature at the time, and readers would sometimes question their truthfulness.

The story continues: “But there was no chance to dispute (Ripley’s) feature on the shortest and tallest soldiers in the army because Master Sergeant W.J. Helmer of Fort Kamehameha came forward to substantiate Ripley’s claim.

“Helmer took the accompanying photo of these two soldiers at Fort H.G. Wright, in the spring of 1924. Helmer states that Ransom Cowan once served here with the coast artillery and was a musician in the band of the 11th Coast Artillery.

The smaller soldier is Edward T. Allen, now of Bridgeport, Conn. When he enlisted at Fort Wright, he was known as the Army’s smallest soldier, being only 4 feet 11 inches tall and weighing 90 pounds.

“His pal, Cowan, was 7 feet 2 inches tall and weighed 275 pounds. He enlisted in the same company and was known as the Army’s tallest. They were both members of the band at Fort Wright. Allen played the French horn and Cowan was drum major.”

I also located the Ripley’s feature, which is clearly based on the same photo published in the Hawaii newspaper and confirms that both were “11th Coast Artillery Regulars, Fort H.G. Wright, N.Y.”

So was Cowan the tallest soldier in WWI, or the Army’s tallest soldier in 1924? In his “East Fork of Savannah, Jackson County, NC, History 1882-1982,” Lloyd Cowan writes “Ransom Seymour ‘Chunk’ Cowan, supposedly the ‘tallest man in the 1st World War’ – 1917-18 – was for many years owner of a ‘country store,’ ginseng buyer, and Post Master, of the old Green’s Creek post-office until his retirement year 1953.”