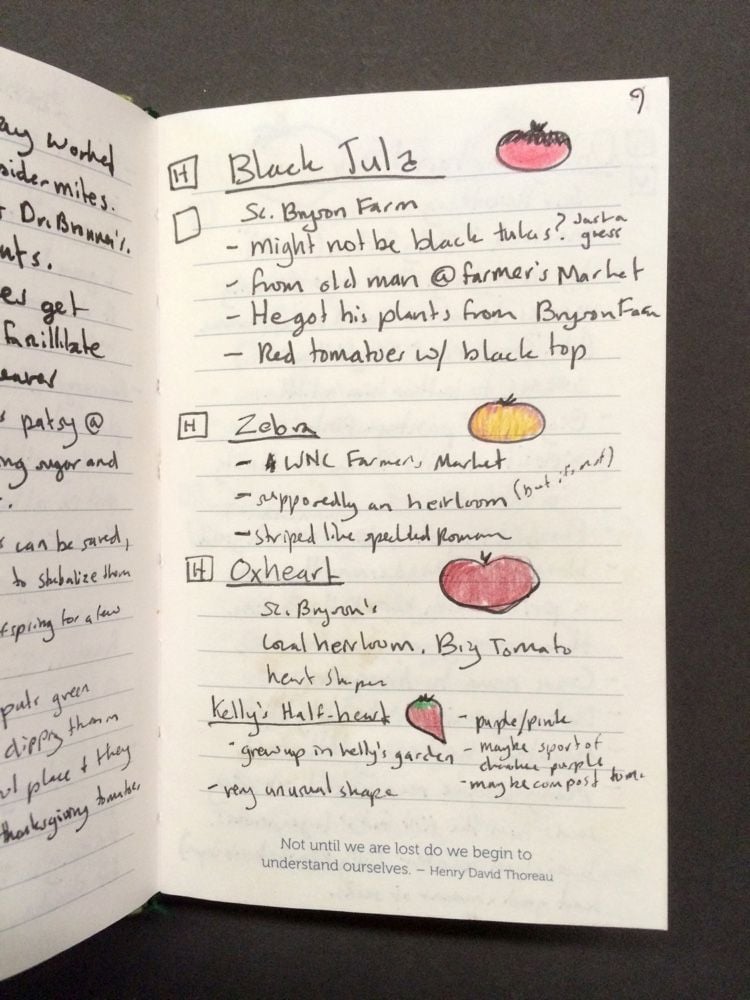 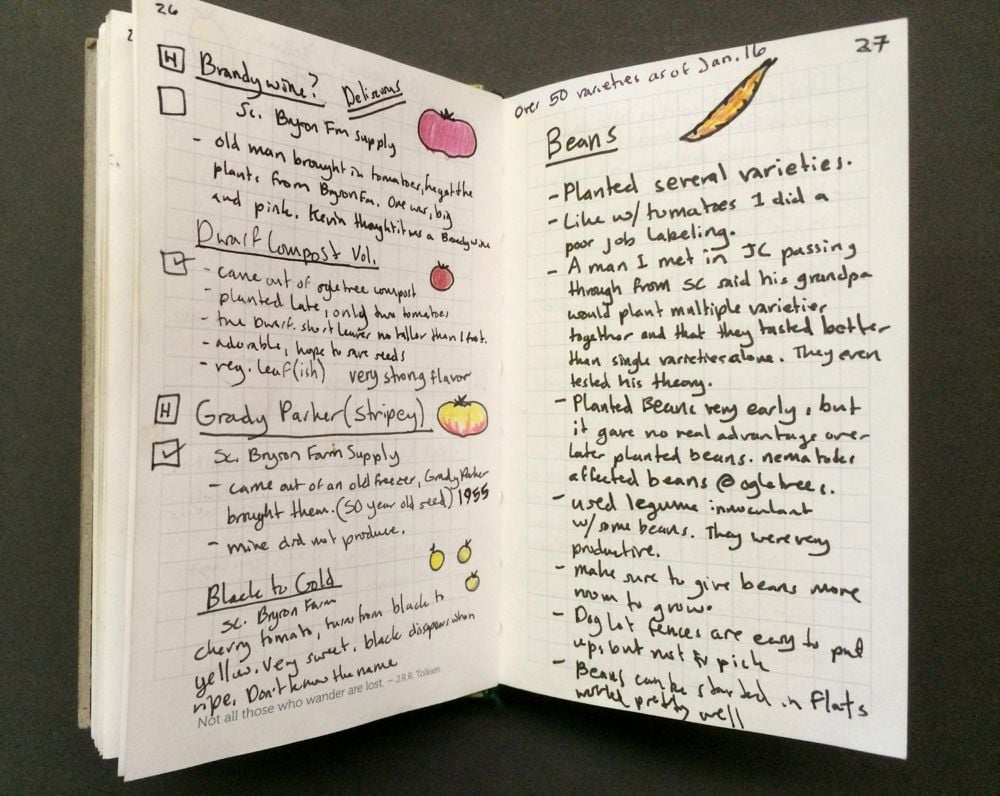 Recently, while I was having breakfast with my favorite mountain musician, William Ritter, we got to talking about “leather britches,” which is a bean dish that my grandmother used to fix from beans that had spent the fall drying out on newspapers in the attic.

When she boiled them, they fattened up and acquired that wonderful flavor that drove me into a feeding frenzy. Cream corn, hot buttered cornbread and leather britches! Just thinking about it reduced me to a salivating fool. Then, William produced a little journal that he said he had kept for the past year and checked to see if he had a listing for leather britches for sale at a produce stand in Crossnore. He did. I asked to see the journal, and photos of several of its pages are below.

Now, it turns out that William has been keeping this journal for the past year, and he has listed every tomato plant and every bean hill he has planted. This little “journal” has turned into a detailed reference of what he had planted, where he bought it, and an account of how it grew. The journal is also illustrated and provides a colorful reference of plants that are heirloom, or have family histories. In some instances, William has talked to people who have saved seeds for 50 years. In the process, he has become an advocate for heirloom seeds and takes any opportunity to recommend to anyone interested in old Appalachian beans that they contact heirlooms.org, which is run by Berea College. There is a catalogue online from the Sustainable Mountain Agriculture Center Inc. titled “A Seed Catalog for Appalachian Heirloom Beans.”

As you can see from the photos below, William’s garden journal has a tremendous amount of useful information. However, there are some names that may leave the reader perplexed. For example, how did the “promiscuous preacher bean” get its name? And how about those Republican beans? I guess the origin of the name “Dolly Parton Tomato” is obvious. Bull Cod Tomatoes, (named for a fanciful resemblance to the testicles of a bull) is a very popular species Tommy-toes are given abundant treatment in the journal and some of the most productive seem to grow wild. William has developed contacts throughout the region and belongs to a number of seed exchanges. He has developed definite preferences in planting. New ground is best for planting and the ground is preferred to a pot. One of William’s contacts recommended putting a pinch of snuff in each bean hill.

When I repeated some of this information on the Internet, along with a few pages of the journal, the response was impressive. I immediately received information from more than 50 Facebook members who all wanted to either talk to William about some of the listings, or to provide additional information. A great deal of the online information was regarding leather britches, and I was surprised to learn that some of the folks grew up disliking them. Some of the posters referred to them as “shuckie beans” and that solved a great mystery for me. I now know that shuckie beans, a traditional meal for the New Year, is leather britches. Finally, William recalled a popular fiddle tune called “Leather Britches.”