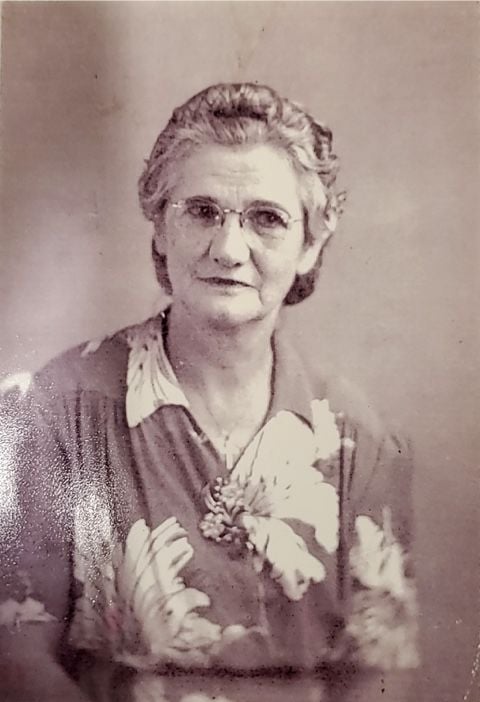 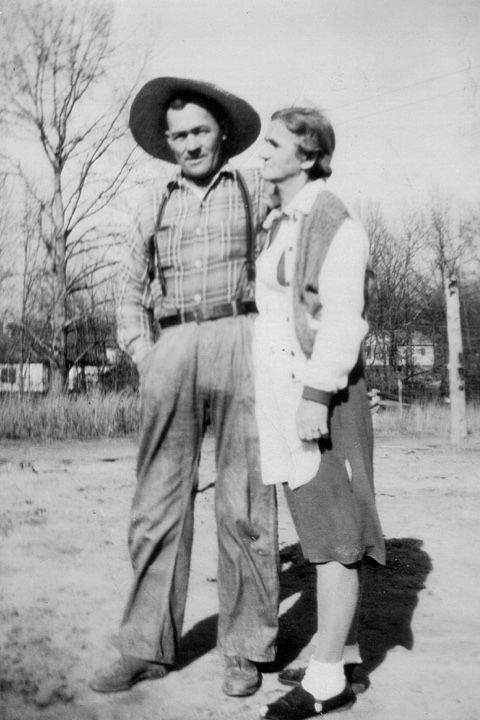 A middle-aged Eva with her husband, Manson Davis.

A middle-aged Eva with her husband, Manson Davis.

Longtime readers may remember last year’s column regarding Eva Davis, who traveled to New York in 1924 with Samantha Bumgarner to make the earliest known recordings of Appalachian string music. Bumgarner is a local legend who performed all her life, headlining Asheville folk festivals and playing at the White House and on Dr. John Brinkley’s infamous radio show. Eva, however, went to New York, secured her place in country music history, and dropped out of sight.

We now know that most biographical information on Eva is incorrect. She’s typically listed as Eva Smathers Davis, but she was in fact Sarah Eva Payne Shelton Davis and grew up in the Proctor area of Swain County that was flooded after construction of Fontana Dam. We know that she is the Eva Davis who made records in NYC because we located one of her great-nephews, Gene Walker of Murphy, who knew her husband’s name and has copies of her records.

Eva died July 4, 1969, in Gastonia. According to her obituary in the Gastonia Gazette’s July 5, 1969, edition, Eva Payne Davis was survived by her husband, Manson S. Davis, and one son, Frank Shelton. Eva had another son, Clark Shelton, who died in 1967. The 1940 census record indicates that Eva was 16 at the time of her first marriage, apparently to a Shelton, based on her sons’ last name, though we haven’t located any record of that marriage.

We have no explanation as to why Eva’s husband is M.M. Davis on their marriage license, Manson S. Davis on the 1940 census and Manson Simmons Davis in his 1973 obituary. However, Gastonia city directories prove he’s the same man, married to the same Eva. The listing is Manson M. and Eva P. Davis in 1939 and 1940, but, in both 1951 and 1959, the directories list Manson S. and Eva P. Davis.

All the above information makes this Eva the person mentioned in our first clue to her identity, an item in the April 25, 1924, Jackson County Journal. Headlined “To Make Columbia Records,” it reads: “Mrs. Carson Bumgarner and Mrs. M.M. Davis left, last Sunday, for New York, where they will be for a week or ten days for a try-out with the Columbia Grafonola people to make banjo and vocal records.”

‘As good as I ever heard’

So those are the facts of Eva’s life. But what was she like? An article by Charles K. Wolfe that appears on the Native Ground Books and Music site, titled “Samantha Bumgarner: The Original Banjo Pickin’ Girl” gives a glimpse of Eva in this description of the NYC recording session: “One of them was a tall, raw-boned woman in her mid-forties dressed in a dark stylish outfit; she carried a fiddle case and introduced herself as Saman-tha Bumgarner. Her companion was younger, wore a dark jacket over her dress, carried a banjo case, and introduced herself as Eva Davis ... After a few tests, the pair got tuned up, and charged into an old dance tune called ‘Cindy in the Meadows.’ Samantha played an archaic, simple fiddle lead for Eva’s rhythmic banjo chording.”

Another reference to Eva comes from a tribute to Georgia banjo player Ed Teague, written by Art Rosenbaum and published in The Old-Time Herald after Teague’s Jan. 19, 2013, death. “In his youth Ed got to hear his wife Hazel’s great-aunt, Eva Davis, who, with Samantha Bumgarner, was one of the first rural musicians to make commercial recordings in the early 1920s.” I contacted Rosenbaum, and he told me that Hazel Teague (also now deceased) “did confirm other stories I’ve heard that Eva was a tough gal and she could ‘cuss like a man’ or ‘was bad to cuss.’”

That was intriguing, but not as amazing as this brief story from the Aug. 1, 1921, Asheville Citizen-Times. Headlined “Woman Charged with Shooting Child When In Arms of Mother,” with a “Bryson City, July 30” dateline, it reads: “Mrs. Manson Davis was lodged in jail here this week charged with having shot and wounded the two months’ old baby of Mr. and Mrs. Verne Bateman, at Proctor Monday afternoon. Mrs. Bateman had her child in her arms when Mrs. Davis opened fire, according to reports reaching here. The baby was not hurt seriously and its mother escaped injury. The cause of the shooting is not known other than it is reported some disagreement had arisen between the two women.”

Gene Walker, Eva’s great-nephew, says he heard about the incident from his mother, who was living near Eva in the Proctor area at the time.

“It was down by the railroad tracks,” he said. “I think the bullet followed the tracks and bounced and hit the baby. The way I remember it, the baby was in a different group of people from where she was aiming.”

Walker said that story is consistent with the Eva he knew.

“She was quite a character,” he said. “She was a lot of fun but mean as a rattlesnake.” He says Eva didn’t tell him much about her trip to New York, but he did hear her play the banjo. “She was as good a banjo player as I ever heard.”

Another reference to Eva Payne Davis recording with Bumgarner in NYC comes from an article in the Fall 1996 edition of the Fontana North Shore Historical Association, written by Willa Mae Hall Smathers, who’s now deceased. Smathers, who was Eva’s great-niece on her mother’s side, details the songs Eva and Samantha recorded and describes the Paynes as a musical family. She also says Eva’s second marriage was to Manson Davis, that Eva married a George Shelton first and that the couple moved from the Fontana area to Gastonia.

Nothing about tracking down information on Eva has been easy. We found Gene Walker through Ed and Hazel Teague’s daughter Carolyn Chamblee of Monroe, Georgia, but she didn’t remember hearing her parents talk of Eva.

Gene knew all about Eva, but he initially wasn’t clear about the family connection that made her his great-aunt. We solved that mystery by finding out that a Sarah C. Murphy had married William W. Walker in 1865. The 1870 census placed William W. Walker and Sarah C. Walker in Sevier County, Tennessee, with their two sons, John B. Walker and Zachariah H. Walker. Thanks to the book “Swain County Heritage,” we learned that Sarah Catherine Murphy Payne – mother of several children including William, James Decatur and Bailey Payne and Matilda Payne Laney – had been married to William Walker first.

Obituaries in the Murphy Scout for William, James D. and Bailey Payne all list Eva Davis as a sister and two also include Tilda Laney as a sister. Taken together, that means Gene Walker’s grandfather, J.B. Walker, was Eva’s half-brother, and Eva was Gene’s great-aunt. The heritage book entry was written by Willa Mae Hall Teague, later Smathers, who also wrote about Eva for the Fontana North Shore publication.

And so, through genealogical and census records, and family stories, we know the facts of Sarah Eva Payne Shelton Davis’ life and are certain she’s the Eva who traveled to New York to leave her mark on music history.

This report wouldn’t have been possible without the research assistance of local historian George Frizzell and soon-to-be Western Carolina University graduate Annalee Blanks. It also might not have been written if Annalee and fellow WCU history students – Autumn Chandler, Rene Cote, Brandi Delp and Ashley Berry – had not delved into Eva’s history and discovered that the oft-mentioned Eva Smathers Davis didn’t really exist. George, Annalee and I extended the research this past fall when Annalee interned with us at the Jackson County Genealogical Society.

Thanks also go to musician/writer/music historian Wayne Erbsen of Asheville, who first alerted us to the Fontana North Shore article and shared a photo of Eva with her husband; to Rich Martin of Archeophone Records, who located the 1921 article about Eva being jailed; to former WCU Mountain Heritage Center staffer Bill Mansfield, who shared information he had learned from an interview with Willa Mae Smathers; and to Ricky Walker, son of Gene and great-great-nephew of Eva, who helped connect me with his dad and sent a photo.