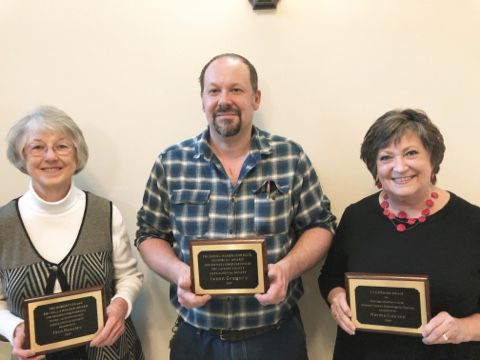 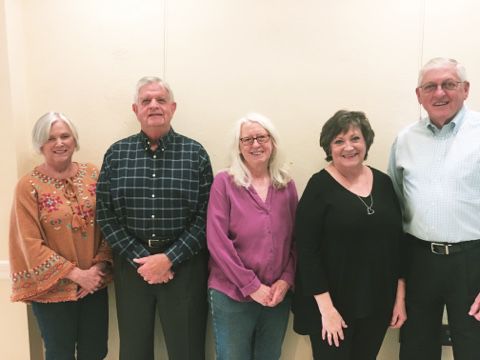 During its recent annual meeting, the Jackson County Genealogical Society announced the winners of its three annual awards and installed officers for 2020.

The Holden Award is given for an outstanding contribution to the field of genealogy, and Hensley worked over the past year to document the history of the local Crawford family.

Gregory received the Deitz Award, given for service to the JCGS, for his efforts to enhance the Society’s reference collections by photographing many materials available in Raleigh and Durham archives and making them available locally.

The Patron Award is given to the person who makes a significant contribution to the JCGS, and Clayton put in many hours organizing two successful fundraisers in 2019.

The JCGS has worked since its 1991 founding to bring together individuals interested in genealogy; to discover, research and exchange materials related to Jackson County genealogy; and to publish genealogical information on a regular basis.

The Society’s office, staffed entirely by volunteers, is located in the Courthouse wing of the Jackson County Library and is open Monday-Friday 10 a.m. until 5 p.m. and Saturdays by appointment.

The JCGS meets on the second Thursday of each month, presenting free programs on topics related to genealogy, area history and mountain culture; the most recent program featured live bluegrass and country music.

The Society maintains a research library of more than 1,800 volumes, the largest of its kind west of Asheville. It includes printed digital images of Thomas Store ledgers from the 1830s, 1840s and 1850s, one of the projects Gregory completed, and is open to the public during office hours.

The Society has published numerous volumes over the past two decades, including the two-volume “Jackson County Heritage,” and “Cemeteries of Jackson County.”

Application forms are available at all four county high schools or online at jcgsnc.org. Deadline to apply for this year’s scholarships is Friday, April 3.

Anyone interested in genealogy or local history is welcome to join the Jackson County Genealogical Society and/or to do onsite research in the group’s library. For more information, find the JCGS on Facebook; call 631-2646 during office hours; email jacksoncountygenealogy@gmail.com; or find the Society online at www.jcgsnc.org.