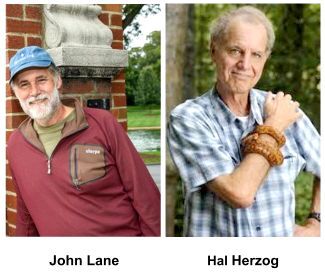 City Lights Bookstore will host a conversation with John Lane and Hal Herzog at 6:30 p.m. Thursday, May 12.

They will discuss a number of topics, including Lane’s latest book, “Still Upright & Headed Downstream.” These collected river writings encompass all of John Lane’s river writing outside his two book-length narratives, “Chattooga: Descending into the Deliverance River” and “My Paddle to the Sea: Eleven Days in the River of the Carolinas.”

Lane is professor emeritus at Wofford College where he taught creative writing and environmental studies, and directed the Goodall Environmental Studies Center. There he helped imagine and direct the Thinking Like a River Initiative.

In the past decade Lane has been named one of seven regional Culture Pioneers by Blue Ridge Outdoors and he has been honored with the Water Conservationist Award from the South Carolina Wildlife Federation, the Clean Water Champion by South Carolina’s Upstate Forever, and inducted in 2014 into the South Carolina Academy of Authors. One of the founders of the Hub City Writers Project, Lane lives near the banks of Lawson’s Fork outside of Spartanburg, South Carolina.

To reserve copies of these titles, visit or call City Lights Bookstore at 586-9499.